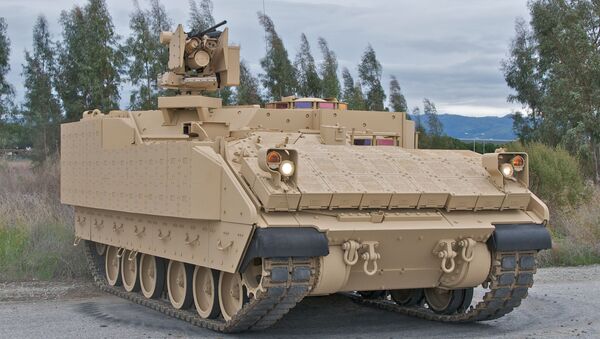 In eight months, the US Army will embark on a new, multi-phase series of tests to assess the viability of, and educate troops on how to operate, autonomous combat vehicles.

The US Army’s efforts to lower the number of boots on the ground will reach a new level in March 2020 as the service branch begins its three-phase testing program in Fort Carson, Colorado.

The first phase, according to the Army’s July 11 release, will be the first time US soldiers have operated the modified Bradley Fighting Vehicles, known as Mission Enabler Technologies-Demonstrators (MET-Ds). The upgraded equipment features a remote turret for the combat vehicle’s 25-millimeter main gun and a 360-degree situational awareness camera system.

The Army announcement also touts that touch screens will be a new technology utilized in their “enhanced crew stations.”

For a month, US Army soldiers will be operating two MET-Ds, each carrying one driver, one gunner and four soldiers in the vehicle’s rear, tasked with conducting “platoon-level maneuvers with two [M113 armored personnel carrier] surrogate vehicles that fire 7.62 mm machine guns.”

"We've never had Soldiers operate MET-Ds before," reads a statement from David Centeno Jr., chief of the GVSC’s Emerging Capabilities Office, in the announcement. "We're asking them to utilize the vehicles in a way that's never been done before."

A primary motivation for developing more autonomous technology and remote combat vehicles (RCVs) in the US military is that they can break through enemy defenses without the possibility of raising the US’ own body count.

"You're exposing forces to enemy fire, whether that be artillery, direct fire," Centeno said. "So, we have to find ways to penetrate that bubble, attrit their systems and allow for freedom of air and ground maneuver. These platforms buy us some of that, by giving us standoff."

Phase two of the program, scheduled for the latter half of fiscal year 2021, will bring about increases of both troops and military hardware, including four additional MET-Ds, as “company-level maneuvers” are introduced.

The release does emphasize that prior to this phase, the US Army’s “light infantry unit plans to experiment with the RCV light surrogate vehicles in Eastern Europe.”

"An RCV reduces risk," Maj. Cory Wallace, robotic combat vehicle lead for the Army’s Next Generation Combat Vehicles Cross-Functional Team, said at the manufacturer conference on June 26. "It does so by expanding the geometry of the battlefield so that, before the threat makes contact with the first human element, it has to make contact with the robots. That, in turn, gives commanders additional space and time to make decisions."

The final phase of testing, scheduled for mid-fiscal year 2023, is when US Army soldiers will be introduced to “four medium and four heavy purpose-built RCVs.”

To those skeptical of the soldiers’ abilities to confidently operate these RCVs within one phase of testing, Wallace, speaking at the Robotic Combined Arms Breach Demonstration at the Washington-based Yakima Training Center in May, noted the "soldiers have demonstrated an intuitive ability to master controlling RCVs much faster than what we thought” and only need about two days to become comfortable with the controls.

Back in March, Sputnik reported that the US Army was in the market for a new remote weapons system for their medium-sized combat vehicles, such as the M113 and the Armored Multi-Purpose Vehicle (AMPV). The July Army release, however, did not reveal whether the M113s used in the upcoming program will include an updated system.