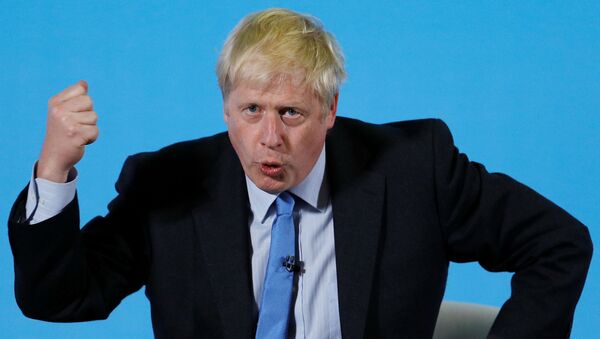 MOSCOW (Sputnik) - Boris Johnson, the current frontrunner in the UK Conservative Party leadership race, will aim to strike a trade deal with the United States by the Brexit deadline and set it as one of his core priorities if he becomes UK prime minister, The Times reported on Monday, citing an informed source.

"The key to the whole thing is the US. If we get a trade deal with America we will be very quickly in the market for other deals. It encourages others to realise that we mean business", Jonson’s unnamed ally told the newspaper.

With a view to negotiating a deal, Johnson is likely to travel to the United States at the time of the UN General Assembly session in September, according to the politician’s allies. The visit, however, may take place even sooner.

Johnson is expected to secure a limited trade deal in "one area" of goods with the United States by the 31 October deadline and outline a framework for a full-fledged agreement with US President Donald Trump.

"There is no question that the moment we leave on the [October] 31st we should be in a position to get some kind of arrangement with the US", the source said.

Within the first days in office, Johnson, however, is supposed to visit France and Germany, according to the source.

The UK Conservative Party is expected to announce the name of its new leader on 23 July after its members vote to choose between Johnson and current Foreign Secretary Jeremy Hunt. The winner will automatically become UK prime minister.

The new leader will have to deal with both the Parliament, which refuses to approve the agreement previously negotiated with Brussels but also rejects the no-deal scenario, and the European Union, which is intransigent about renegotiating the arrangements.

Johnson, for his part, keeps reiterating his "do or die" pledge to leave the bloc by 31 October, while not ruling out proroguing Parliament to push through a no-deal unless another solution is found.