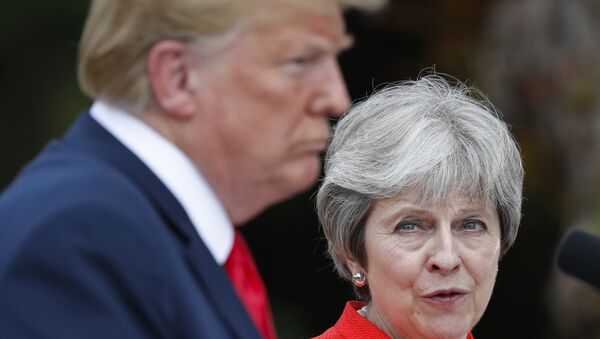 Without mentioning names, Trump tweeted an attacking seemingly directed at pogreessive politicians, namely: New York’s Alexandria Ocasio-Cortez, Ayanna Pressley of Massachusetts, Ilhan Omar of Minnesota, and Rashida Tlaib of Michigan. All of which have called for the president’s impeachment.

Outgoing PM Theresa May lashed out at Donald Trump over a Twitter rant on Monday, calling it “completely unacceptable”.

She took part in the widespread criticism of the president's attack on a group of freshman congresswomen which has been described as “dangerous” and “racist”.

The tweet by President Trump was a targeted attack against “Progressive Democratic” politicians, saying that they should "go back and help fix the totally broken and crime infested places from which they came".

So interesting to see “Progressive” Democrat Congresswomen, who originally came from countries whose governments are a complete and total catastrophe, the worst, most corrupt and inept anywhere in the world (if they even have a functioning government at all), now loudly......

The tweet seemed to be directed at a group of four freshman democrats who have called for the presidents impeachment, also called "The Squad": Alexandria Ocasio-Cortez, Ayanna Pressley of Massachusetts, Ilhan Omar of Minnesota, and Rashida Tlaib of Michigan.

Of the group, only one was born outside of the United States; lhan Omar, who's family arrived in the US as refugees in Minneapolis from Somalia in 1997.

A spokesman for the UK Prime Minister said on Monday that "The Prime Minister’s view is that the language used to refer to these women was completely unacceptable.”

When asked if the Prime Minister believed that the comments were "racist", the spokesman replied that the PM had nothing further to add.

These comments come on the sixth anniversary of Theresa May’s infamous “Go Home” vans which were driven around the streets of the UK displaying the message “Go Home or Face Arrest” as a warning to illegal immigrants.

The comments by the PM are however an indication that she is taking a less hospitable approach to the president in her last days in office.

Attention has now been turned to likely Prime Minister Boris Johnson, who has been branded as Trump’s “lapdog” following failure to protect UK ambassador to the US Sir Kim Darroch, who was expelled from the US last week.

Mr Johnson has also expressed his desire for a speedy trade deal with the US, which the EU has said is not acceptable before the UK has officially departed from the EU.