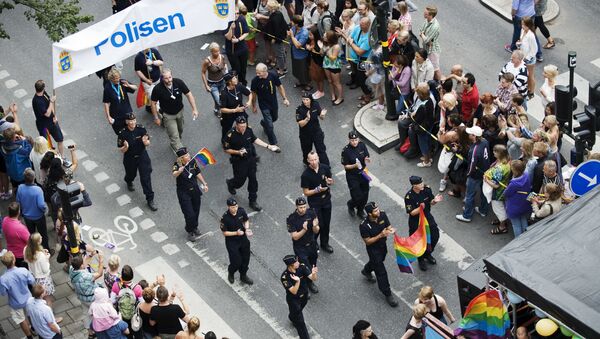 A survey by the Swedish Crime Prevention Council has named southern Malmö the country's most dangerous area, whose inhabitants feel the most insecure.

In addition to handing out T-shirts and offering “pride tattoos”, the police intend to roll out a soap bubble machine described as a “spirit-raiser”, promising to “show up in the best mood”.

Ahead of the parade, Caroline Mellgren, the director of police training in Malmö published an opinion piece in the daily Sydsvenskan citing “deeply rooted homophobia within the Swedish police force”. According to Mellgren, the homophobia manifest itself “internally” when police officers oppose participation in various LGBT activities. She concluded that police cadets must therefore be trained to “stand up for all people's equal value”, which, she argued, would lead to more “professional police work” and “increase public confidence in the police”. To remedy this, the new police programme at Malmö University will focus on “norm challenging” and inspire understanding of a hate crime victim's experience.

“Of course we will go to the parade”, the Malmö police said, announcing its participation in this year's gay pride under the slogan “The police for everyone” in a lengthy Facebook in the wake of the aforementioned article. The police promised to gear up with loudspeakers and uplifting music, as well as a bubble machine, calling on everyone to join the parade and “stand up for everyone's equal value”.

However, the post triggered rather mixed reactions. While many users sporting rainbow flags in their nicknames cheered the police's involvement and hailed this step as “the right thing”, many others were highly critical, suggesting it was a misappropriation of public funds and that the police had other things to do in a city rife with crime.

“The police should focus on their work to fight crime and serve people's order and security. As for me they are free to demonstrate in their spare time and in plain clothes, but not on paid work time. What we are seeing now undermines trust in law and order”, a user wrote in the comments field.

“Can you tell us how much this costs us taxpayers? Put the resources on clearing up crimes instead of this PR stunt”, another one noted.

“Starting from today, I will want listen to the police complaining about a lack of resources. Never again”, yet another user mused bitterly.

Another user compared the police's engagement in LGBT issues with with the backing of Malmö's shrinking Jewish minority, which has been described as “facing extinction”. “Imagine if the Jews in Malmö received the same support”, the comment said.

Another user wondered whether the parade will pass Malmö's numerous immigrant-heavy ghettos with a large percentage of Muslims, such as Rosengård, Hermodsdal, and Seved. Those are among Sweden's most nefarious ghettos, officially labelled “vulnerable areas”. Police and first aid admitted that fulfilling their mission in these neighbourhoods was difficult due to gangland violence and general animosity, while Sweden's government-run postal service, PostNord, has even halted mail delivery to some addresses in Malmö.

At about 330,000 inhabitants, Malmö is Sweden's third-largest city. About half of the city's population is of foreign descent, earning it the moniker of “Sweden's most multicultural city”. The aforesaid Rosengård, where close to 90 percent of residents have foreign roots, has sizeable Muslims diasporas, including Syrians, Somalis, Bosnians, and Afghans.

Malmo in Sweden is the rape capital of Europe due to EU migrant policies. Anyone who says there isn't a problem is lying to you. pic.twitter.com/Aw7GvsECeX

​Malmö's Fosie district was named Sweden's most dangerous crime-exposed area, whose inhabitants feel the most insecure, according to a 2019 survey by the Swedish Crime Prevention Council (Brå).

In the past few years, the city has seen an increasing number of deadly shootings, car fires, and explosions. The recent wave of shootings accompanied by several blasts was dubbed an “epidemic that must be stopped” by Moderate party legal spokesman Johan Forsell.