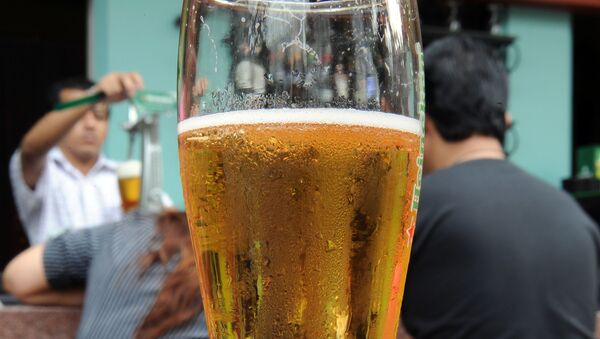 Alcohol is forbidden in Islam, and the Malaysian government is worried that non-alcoholic beer could mislead Muslim customers into thinking that they can drink it, while in fact they cannot.

Dutch brewer Heineken has responded to concerns by Malaysian authorities that the halal status of its alcohol-free malt beverage was confusing to Muslim people.

Heineken 0.0, a non-alcoholic alternative to its namesake beer, was launched in Malaysia, where Muslims make up a majority of the population, last month.

Heineken’s first-ever alcohol-free beer is being marketed under the tagline "Now You Can”.

In a media statement, the company’s branch in Malaysia explained that its Heineken 0.0 beer is “non-Halal and is only targeted at non-Muslims, aged 21 and above”.

Heineken also said that it is selling this beverage alongside disclaimers clearly indicating that it is made for non-Muslim customers over the age of 21.

It added that the "Now You Can" slogan targets non-Muslim consumers who want to “enjoy a beer, including at lunch, during work meetings, after the gym, and when one needs to drive”.

“We also wish to reiterate that Heineken Malaysia Berhad is a company that is culturally sensitive in the way that we operate our business", the statement concluded.

On Saturday, Malaysia's Islamic Development Department, the agency in charge of halal certification in the nation of 32 million, shared a Facebook post reminding that non-alcoholic beer is still prohibited in Islam as it is made in the same process as regular beer.

Malaysia’s religious affairs minister, Mujahid Yusof Rawa, did not call out Heineken outright but claimed that zero-alcohol beer is misleading for Muslim customers.

"Using the name alcohol-free beer is confusing as the process of producing the drink including distillation is carried out in the system used to produce alcohol products", said the religious affairs minister, Mujahid Yusof Rawa.

"We know the alcohol-free drink is produced by a beer manufacturer but it would cause confusion as some Muslims thought they could consume the drink", he said.