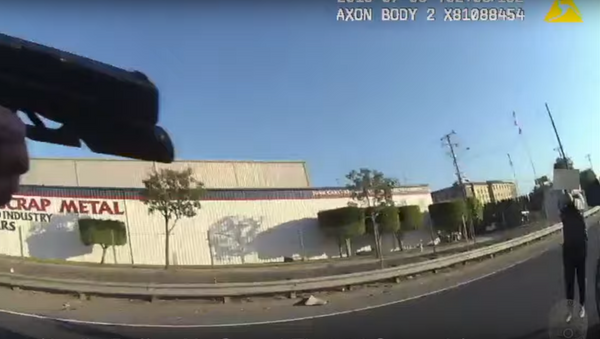 The recording shows an unidentified officer approaching a gray SUV, meeting face-to-face with Williams, who appears to be in a shooting stance and holding a firearm. Within seconds, the officer discharges his department-issued firearm, striking Williams in the chest and right leg.

The first 30 seconds of the bodycam recording do not include audio. It eventually comes on as the officer reports the shooting to a dispatcher. The remainder of the footage records the officer’s commands to Williams as she lies on the ground and his interactions with the dispatcher and a fellow officer who responded to the scene.

“Show me your f**king hands! Show me your hands,” the officer is heard yelling after firing his weapon. “Don’t f**king move! Put your hands out to your side! Don’t move!”

As both cops tend to Williams’ wounds, it’s discovered that the firearm she pointed toward the initial responding officer was a replica, which was later determined to resemble a Beretta 92 FS. Williams succumbed to her injuries after being transported to a nearby hospital.

The bodycam release, which includes a video statement from Fullerton Police Chief Bob Dunn, reveals that roughly 90 minutes prior to the shooting, Williams’ father had reported her and a rental car missing to the Anaheim Police Department. During that call, the concerned parent indicated that Williams had been on antidepressants and that there was a possibility that she was trying to hurt herself.

In the same video release, Fullerton Police spokesperson Lt. Jon Radus explained that the officer came into contact with Williams after she sped past him as he transported a police dog to a nearby veterinary hospital. At some point during the confrontation, Williams reportedly intentionally struck the officer’s car. The vehicle she was driving came to a stop in opposing traffic lanes.

“The job of a police officer is often difficult and dangerous,” Dunn said. “Although we train to work hard and deescalate volatile situations, officers must react - sometimes in a split second.”

“The decision to use lethal force is not something we take lightly. It is truly tragic for all involved,” he added.

Following the video’s release, Lee Merritt, the Williams family’s attorney, indicated that the family had not been informed of how Williams confronted the officer. “If they had known that from the beginning that would have gave them a bit more closure. That would have helped them sleep a bit more - now, we still have questions,” he said.

The investigation into the deadly shooting incident is ongoing. Local media reports indicate that the officer involved in the shooting has been placed on paid administrative leave for the remainder of the probe.

000000
Popular comments
Why o cops need to hysterically scream and use foul language?