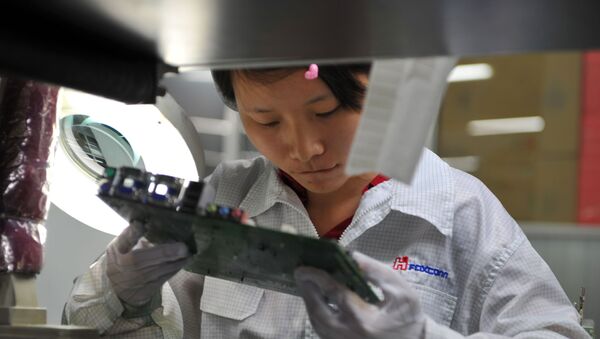 BEIJING (Sputnik) - China created 7.37 million new jobs in the first half of this year, thus fulfilling the 2019 plan by 67 percent, the National Bureau of Statistics of China said Monday.

"In the first half, a total of 7.37 new jobs were created in urban areas, which accounts for 67 percent of the year target", the bureau said in its fresh report.

In June, Chinese employees worked on average of 45.7 hours per week. At the end of the second quarter, 182.48 million migrant workers were employed in rural areas, which is 2.26 million more than during the same period last year.

Chinese real disposable income per capita has increased by 8.8 percentage points in comparison with the same period of 2018, the report also indicated. The average income per person is registered at 13,281 yuan ($1,932), which is 9 percent higher than in 2018.

“In the first half of 2019, the real disposable income per capita was 15,294 yuan [$2,225]. The nominal growth was 8.8 percent year on year. It's 0.1 percentage point higher than that of the first quarter. The real increase after deducting price factors was 6.5 percent, which is 0.2 percentage point higher than the indicators of the economic growth in the first half of the year,” the report stressed.

China is planning to create more than 11 million new jobs in 2019 while the unemployment rate is expected to be at 4.5 percent.

According to the US-based global data platform, Knoema, the Chinese unemployment rate was 3.8 percent in 2018 which is 0.1 percentage point less than the previous year.