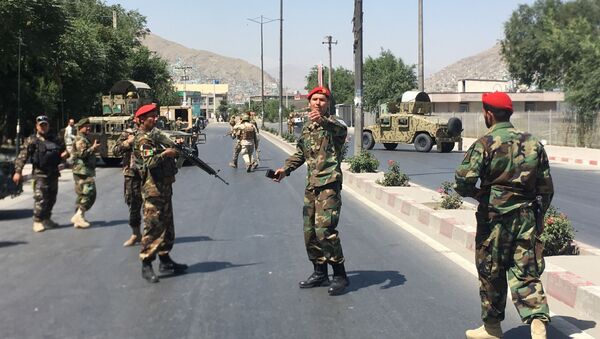 © AP Photo / Rahmat Gul
Subscribe
KABUL (Sputnik) - At least 76 Afghan civilians were killed or wounded in separate incidents across the country on Monday, marking another deadly day for the country despite US-Taliban peace talks aimed at ending the country’s 18-year war, local officials and sources said.

The deadliest civilian casualties on Sunday night were caused by a US and Afghan forces joint airstrike and raid in the province of Uruzgan that killed or wounded 35 civilians, according to the former governor of the province, Amanullah Temori, who claimed several of his family members were among those dead and buried by the bombing.

The latest attack, which occurred Monday afternoon in Kandahar Province, involved a roadside bomb near a vehicle full of people in the Khakrez District. No militant group claimed responsibility for the blast, but roadside bombs targeting Afghan forces is a common tactic that has been used by Taliban militants, becoming a major cause of civilian casualties.

According to victim relatives, the incident occurred while the vehicle was heading to a nearby area to visit a religious site.

"Eleven civilians, including four women and children, were killed and 30 more wounded when a bus full of passengers was hit by a roadside bomb today afternoon", the head of a local hospital in the city of Kandahar, Naimatullah, said.

According to a local resident, those killed and wounded were taken to hospitals with a more than five-hour delay due to bad roads, which increased the number of dead. Afghan President Ashraf Ghani shared condolences to the victims and expressed hope for their recovery.

The seventh round of peace talks between the Taliban and the United States ended Tuesday as US Special Representative for Afghanistan Reconciliation Zalmay Khalilzad, who leads the talks, departed for China. Khalilzad wrote on Twitter that he would go to Washington to further discuss the Afghan peace process.

000000
Popular comments
Only 76 casualties? That is a low count for the Americans who are accustomed to bombing hospitals and wedding or funeral gatherings. Like they always claim that it is nothing more than acceptable collateral damage.