'We Will Not Give an Inch Against the English': Iranian MP Vows Legal Response to Tanker Seizure 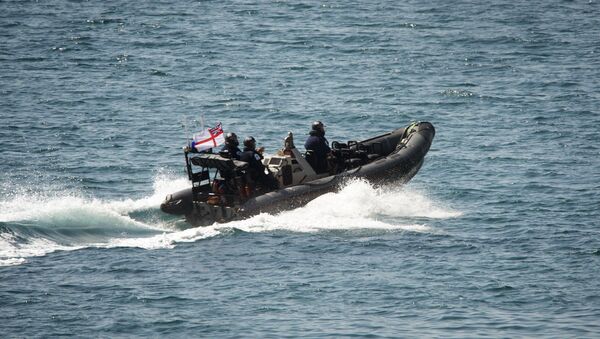 © AP Photo / Marcos Moreno
Subscribe
The detention of a supertanker laden with Iranian oil off the coast of Gibraltar by UK Royal Marines on 4 July has caused tensions between the two countries to skyrocket, with London deploying warships to the Persian Gulf amid claims that Tehran has attempted to seize a British oil tanker. Iran has denied the claims and accused the UK of "piracy."

Iran's parliament is considering an appropriate response to the British seizure of the Grace 1 supertanker and will adopt a formal decision on the matter next week, Mohammad Reza Pour-Ebrahimi, lawmaker and senior member of the parliament's economic committee, has announced.

"We will not give an inch against the English's measure," the lawmaker said, speaking to Mehr News on Sunday.

According to the lawmaker, the tanker seizure was only "the continuation of the English's animosity against the Iranian nation both before and after the Revolution [of 1979]. This measure will not be left unanswered," he said.

Pour-Ebrahimi did not go into detail on what specific steps Iran could take, but said that "England will pay huge costs for its action."

It's not clear whether the lawmaker referred to the UK as 'England' deliberately as opposed to Britain or the United Kingdom, or whether it was a feature of Mehr News' translation.

On Saturday, Iranian Foreign Minister Mohammad Javad Zarif spoke to his UK counterpart Jeremy Hunt, reiterating Iran's demands that the UK release the Grace 1 tanker and saying that Iran would continue to export oil under any circumstances. Earlier, Hunt tweeted that he had told Zarif that London would "facilitate release" of the tanker if provided guarantees that the tanker would not go to Syria.

British Royal Marines seized the Grace 1 off Gibraltar last week, accusing Iran of trying to smuggle the oil to Syria, in contravention of European Union sanctions against the war-torn country. Iranian officials called the seizure an illegal "form of piracy," and said the tanker was not headed to Syria anyway.

The tanker remains docked at Gibraltar, although the crew of the ship was released Friday without charge.

Also Friday, UK media reported that the Royal Navy would be stepping up its patrols in the Persian Gulf by deploying a second warship to the region amid claims that Iranian forces had tried to seize British oil tankers traveling through the waterway. Iranian authorities have flatly denied the claims.

000000
Popular comments
Haha, Iran singled out the English. The English probably prefer being called British so they can hide among the Scottish and others who are better liked by Europe. I think Russia can be friends with Scotland and are other parts but the English are the big Russophobe and the must subservient to US requests. A famous English pirate is Calico Jack, he and Anne Bonny where probably the Bonnie and Clyde of their time.

FeEisi
14 July 2019, 14:03 GMT1
000000
This act of piracy must be stopped before the world descends into total choas and mayhem. The UN should direct Interpol to put out a arrest warrant for the UK marines who face 20-30 years in solitary confinement or hung if any crew were harmed. Likewise May who ordered this attack whilst under resignation must be immediately arrested and confined to house arrest. Piracy of this nature without moral or legal foundation which proceeded without UN authority must be stopped in its tracks before all nations descend into counter piracy to survive. UE sanctions are immoral and illegal and have no protection under International law. The UK must immediately release the boat, crew, and intact cargo and provide appropriate compensation. Denouncing Mays actions as criminal and immoral and in perjury of parliamentary proceedure. May must be incarcerated for 20 years for giving this order. Or otherwise the world will risk collapsing into total piracy on the high seas. 🙈 🙉 🙊 🎃 A note for trolls there is no substance of any nature to compare the actions of Russian border control stopping the Ukrainian provocation endangering safe passage of ships waiting for safe escort into the narrow shallow entry under the Kerch bridge. Ukraines action also jeopardised the bridge itself considering Poroshenko and his gang of criminal thugs threatened on much more than one occasion to blow the bridge up and explosives being found on the boats seized.