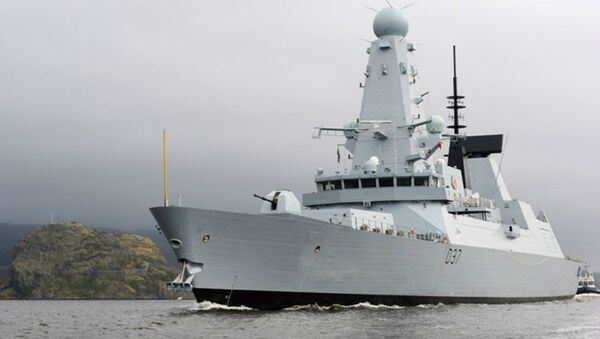 A Royal Navy frigate began escorting British tankers in the Strait of Hormuz and the Gulf of Oman last week after Royal Marines seized a supertanker laden with Iranian oil off the coast of Gibraltar, with London accusing Iranian gunboats of approaching its commercial vessels and attempting to halt them. Tehran has denied the claims.

Footage has emerged online purportedly showing the HMS Duncan Destroyer sailing through the Turkish Straits on route to the Persian Gulf to complement another warship already in the region escorting British merchant vessels passing through the Strait of Hormuz.

HMS Duncan was deployed in the Black Sea earlier this month to take part in the Sea Breeze 2019 naval and amphibious assault drills involving multiple NATO members as well as Georgia, Moldova, Sweden and Ukraine.

HMS Duncan moving through the waters of Istanbul on Friday. By @ilginkarl pic.twitter.com/c4ZXezOKAT

Armed with a complement of anti-ship and anti-air missiles, the destroyer is also fitted with a 4.5 inch main gun, and can carry 1-2 Lynx Wildcat multipurpose helicopters.

The move to beef up the Royal Navy presence in the Persian Gulf was reported on Friday, with the ship to be accompanied by four anti-mine vessels and a support ship once it makes it to its destination.

The deployment was announced after London claimed Wednesday that five Iranian gunboats had allegedly approached the British Heritage tanker before being warned off by the HMS Montrose frigate, which was accompanying the commercial vessel during its passage through the Strait of Hormuz.

The alleged incident prompted the UK to raise its ship security level to 'critical' on all British merchant vessels operating near or through Iranian waters.

Iran's Islamic Revolutionary Guards Corps flatly denied that it attempted to stop the UK tanker, while Iranian President Hassan Rouhani said the warship deployment was a sign that London was "scared" and knew that its earlier seizure of the Grace 1, a Panamanian-flagged supertanker filled with Iranian oil off the coast of Gibraltar, was illegal.

On Saturday, Iranian Foreign Minister Mohammad Javad Zarif spoke to British Foreign & Commonwealth Secretary Jeremy Hunt, telling him that Iran would continue exporting oil under any circumstances and urging him to release the detained vessel. Hunt said the UK would release the Grace 1 if given assurances that it would not go to Syria.

Royal Marines boarded and seized the Grace 1 off Gibraltar on July 4, accusing Iran of trying to smuggle the oil to Syria, in contravention of EU sanctions. Iran called the seizure a "form of piracy" and said it set a "dangerous precedent."