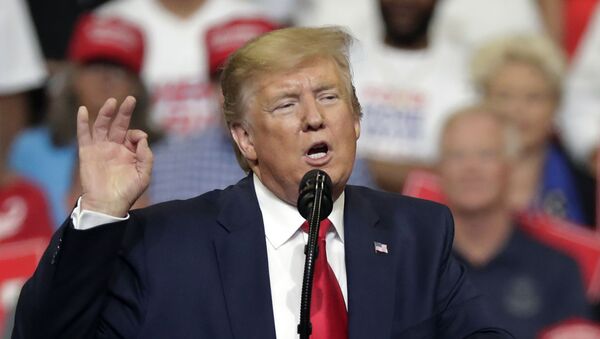 The US president launched a Twitter offensive against the Democrat freshman congresswomen, who share a passion for heated social media rants with him and often choose Donald Trump and his policies as a target for their criticism. However, Nancy Pelosi also got a fair share of the online roasting from the president.

US President Donald Trump has lashed out at the “progressive” Democrat Congresswomen for “loudly and viciously telling the people of the United States, the greatest and most powerful Nation on earth, how our government is to be run,” as he put it on Twitter.

Although he did not call them out by name, Trump noted that these women “originally came from countries whose governments are a complete and total catastrophe, the worst, most corrupt and inept anywhere in the world,” apparently hinting at freshmen Congresswomen Alexandria Ocasio-Cortez and Ilhan Omar, who repeatedly criticised Trump for his stance on immigration, women’s rights and environmental problems.

“Why don’t they go back and help fix the totally broken and crime infested places from which they came. Then come back and show us how it is done. These places need your help badly, you can’t leave fast enough,” the POTUS remarked.

However, he also took aim at the House Speaker and one of the Democrats’ leaders, Nancy Pelosi, saying she “would be very happy to quickly work out free travel arrangements.”

​His rant amassed almost 200K likes and over 30K comments, many of which are critical. Some immediately accused him of being racist and spreading hate speech, calling on Twitter to suspend his account.

Well at least Donny’s racism is out in the open. @GOPChairwoman and @GOP, what say you? Are you all going to finally call out racism or are you going to attempt a deflection or justification? How could this possibly be ok? pic.twitter.com/yilc4HjkiC

@Twitter this account of @realDonaldTrump should be suspended for hate speech. Saying that citizen Congress members should go back to where they came from is heinous an should be stricken from Twitter. This is an abomination and hate speech not protected “Free Speech”

Incredibly nativist and racist remarks from a sitting president. This is ugly language and a stain on the office.

Did you ever tell two of your foreign-born wives to go back where they came from?

Let’s start with Flotus then?

​Some turned to other statesment’s stories.

Friendly reminder that Alexander Hamilton grew up in the Carribean

​This rant came shortly after Trump slammed Ocasio-Cortez and Omar for being “disrespectful” towards Nancy Pelosi after she had complained to colleagues about being frustrated by some colleagues criticising other Democrats, without referring to anyone in particular.

“I deal with Nancy Pelosi a lot and we go back and forth and it’s fine, but I think that a group of people is being very disrespectful to her. And you know what, I don’t think that Nancy can let that go on,” he said.