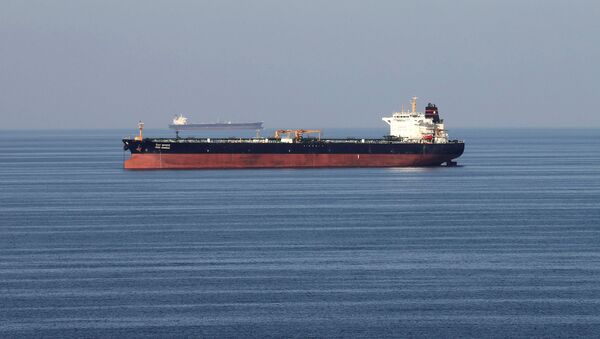 © REUTERS / Hamad I Mohammed
Subscribe
The UK and US attempts to pin the blame on Iran for the alleged attempted seizure of a British oil tanker in the Strait of Hormuz is nothing but provocation aimed at ruining Tehran's image, says Iranian political analyst Hassan Hanizadeh, suggesting that London is seeking any pretext to follow in Trump’s footsteps and exit the Iran nuclear deal.

On 10 July, Washington and London raised the alarm over the alleged attempt by the Iranian Islamic Revolutionary Guard Corps to seize the oil tanker British Heritage in the Strait of Hormuz, something that Tehran has vehemently denied.

According to Hassan Hanizadeh, a political analyst specialising in Iranian-Arab relations and former editor-in-chief of the Iranian news agency Mehr News, the US and UK statements are "provocations aimed at discrediting the image of Iran in the eyes of the international community".

"The British tanker British Heritage was used to carry out provocations and deliberately entered the territorial waters of Iran," Hanizadeh opined. "By intervening in Iranian [territorial] waters and airspace the US and the UK are trying to provoke us into using force."

The Middle East expert pointed out that despite the fact that Iran has the right to detain the British tanker in response to the seizure of the Iranian tanker Grace 1 in the UK exclave of Gibraltar by the British authorities earlier in July, Tehran had demonstrated "patience and wisdom and refrained from such actions".

"One should bear in mind that the UK is going to leave the EU and is coordinating its further military policy against Iran with the United States," the political analyst postulated. "[Britain] is trying to spur Washington on to a military confrontation [with Iran] under the pretext that the Islamic Republic allegedly threatens shipping in the Persian Gulf."

The analyst noted that the Strait of Hormuz incident was followed by a new volley of anti-Iran sanctions, announced by Donald Trump on 10 July, over alleged "secret" uranium enrichment by Tehran.

​However, he did not rule out that Britain is seeking a pretext to exit from the Joint Comprehensive Plan of Action (JCPOA). Previously, in May 2018, the US unilaterally backed away from the deal, while other signatories to the accords, including the UK, signalled their commitment to the agreement.

Hanizadeh emphasised that Iran does not want to enter into direct military confrontation with Western powers in the Persian Gulf. However, if the US and UK step up provocations in the region, Tehran will be forced into giving an appropriate response including military measures, the Mid East expert believes.

The analyst opined that if Iran really intended to seize the British tanker, it would have done this instantly and without any concealment. Hanizadeh referred to the downing of a US RQ-4 Global Hawk surveillance drone on 20 June by the Islamic Republic's armed forces. According to Tehran, the US unmanned aerial vehicle was engaged in spying operations near Kuhmobarak in the southern province of Hormozgan.

On 10 July, Reuters reported, citing the US Department of Defence, that five vessels apparently belonging to the Iranian Islamic Revolutionary Guard Corps had attempted to detain the British Heritage tanker in the Strait of Hormuz by demanding that the British vessel change course and stop in Iranian territorial waters. The British authorities later confirmed a report clarifying that the oil tanker was allegedly approached by three Iranian boats. According to the reports, the tanker was escorted by the British frigate HMS Montrose, which drove the Iranian boats off.

Iranian Foreign Minister Javad Zarif and the Islamic Revolutionary Guard Corps rejected the US and UK version of events, as quoted by Fars news agency.

"These claims have no value," Zarif said.

It was reported that following the incident involving the British Heritage oil tanker, the UK Department for Transport raised the ship’s security level to "critical". For its part, the US Central Command urged the international community to "protect and preserve" freedom of navigation.

Tensions are increasing steadily in the Persian Gulf following the US military build-up in the region and two Gulf of Oman incidents which took place in May and June 2019 and were groundlessly attributed to Tehran by Washington. After the mysterious strikes on oil tankers crossing the Gulf of Oman, Iran shot down a US RQ-4 Global Hawk surveillance drone in late June, saying that it violated its air space. On 4 July, the Gibraltar-based UK Royal Marines detained the Grace 1, a Panamanian-flagged supertanker, reportedly carrying Iranian oil to Syria in violation of EU sanctions against Damascus. In response to the UK move, the Iranian Foreign Ministry summoned UK Ambassador to Iran Nicolas Hopton over what Tehran classified as "illegal seizure".

000000
Popular comments
Really, UK? If Iran wanted to seize your tanker, it would have been a done deal, realize that the straits are a mere 15km wide, and if the tanker was in Iranian territorial waters, it was a mere 7km for Iranian shores, a mere 10 second flight time for anti ship missiles. There is no way that one British frigate was going to do squat, If Iran had decided to take military action. However, It will hurt the UK more to be found in contempt of maritime and European law for impounding the Iranian tanker and forced to pay restitution.