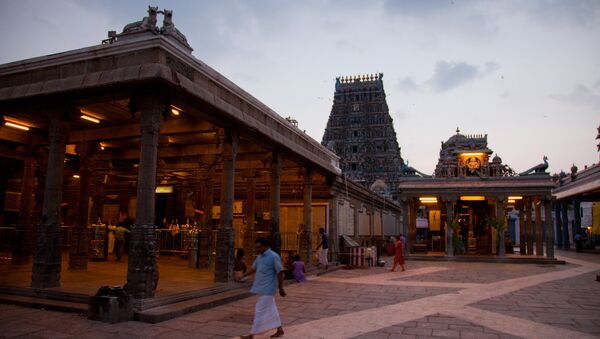 New Delhi (Sputnik): A special train carrying water arrived in the northwestern neighbourhood of Villivakkam near Chennai, India on Friday afternoon from a railway station 217 km away, bringing relief to the desperate people of this city, which has been heavily affected by an unprecedented water crisis.

Fifty wagons, each carrying 50,000 litres (2.5 million litres) of water sourced from a river, have been brought to Chennai, a regional capital which is home to about 11 million people in the Indian state of Tamil Nadu. Politicians representing various political parties were present along with people to welcome the ‘water’ train.

The ‘water’ train arrived in the afternoon from the Jolarpet Railway Station, located 217 km away. It was originally expected to reach Chennai on Thursday, but leakages in a water tank that was being used to fill water in the train wagons forced the railway authorities to delay the departure of the train by a day.

According to a report by the news channel NDTV, Chennai Metro Water, the government-run institution that manages the water supply for the city has set itself a target of ferrying 10 million litres a day to end the 24-day water crisis.

A section of netizens said it was about time that the state government took the initiative to address the water crisis as a priority.

It has started!
Thanks to the politicians of TN for arriving at this situation.
Ofc, instead of complaining, start saving water. Every bucket, every mug. 💧
Plant more trees and allow ground water charging.
This can soon happen to other cities too.#ChennaiWaterCrisis pic.twitter.com/CB0q6dTgWd

Water train, with 50 wagons carrying 50 kilolitres each, has reached #Chennai. To meet its target, of transporting 10 million litres of water per day, the railway authorities have engaged two trains.@TheQuint#ChennaiWaterCrisis#WaterCrisishttps://t.co/avO8AGiFDQ pic.twitter.com/YoWQnYSSef

Some others described the crisis as a grim reality.

a grim reality #ChennaiWaterCrisis - could happen to other cities too https://t.co/Bb081bbNaD

#ChennaiWaterCrisis
Chennai is one of the 21 Indian cities that the government think tank NITI Aayog has said would run out of water by 2021. pic.twitter.com/wN6hPty2pU

Reality of what's going to be in future . Hope every state in India take this seriously or we will suffer . Today in Chennai tomorrow could be some other place in India. Most importantly everyone should take responsibility that no water gets wasted.#ChennaiWaterCrisis #Chennai https://t.co/92ppmpIH6W

​Historically, Chennai has relied on annual monsoon rains to replenish its four main water reservoirs since it is next to impossible to take water from the polluted rivers in the state of Tamil Nadu. On 19 June, Chennai City officials declared "Day Zero", when they confirmed that all four main reservoirs supplying water to the city had run dry.

The lack of rainwater and groundwater has left a majority of Chennai’s over 10.63 million population without consistent access to water.

Water shortage has forced schools to shut, companies to ask employees to work from home and hotels to ration water for guests.

Reports quoted railway officials as saying that the plan is to send at least two trains every day to Chennai based on the travel slots available. They also said they expected to raise the number of trains carrying water to go up.

Southern Railways, which manages the movement of trains across the three southern states of Tamil Nadu, Kerala and Andhra Pradesh, and the central government administered region of Pondicherry has said it will be charging Chennai Metro Water $10,939 (Indian Rupees 7.5 lakh) for each train carrying water into the city. The Government of Tamil Nadu has sanctioned an amount of over $ 9.4 million (Indian Rupees 65 crore) for this project.

According to the report, each train takes about five hours to reach Chennai's north-western neighbourhood of Villivakkam from where water will be pumped into the Kilpauk Water Works, the pumping station that distributes water to localities in Chennai.