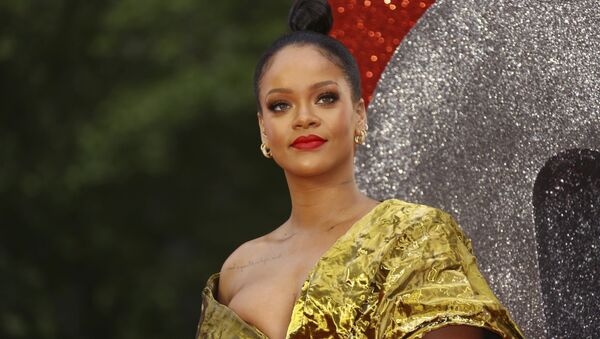 American RnB and pop cult star Rihanna has been accused of cultural appropriation after her photo shoot in Chinese national attire emerged online, with criticism flooding the official account of Harper’s Bazaar magazine - the glamour edition that picked the singer for the front cover of its fresh issue.

For the Chinese version of the magazine, the world’s richest female musician posed in a number of geisha-style outfits, with the edition choosing a picture of Rihanna, or Riri as she is lovingly referred to, donning a scarlet open-shoulder dress, which resembles a kimono, as one for the magazine front cover.

Harper's Bazaar China revealed in the caption for the series of images that the idea behind the cover was to illustrate how a “Western style icon meets Eastern aesthetic”. Despite the slick magazine stating its goals in black and white, references to Chinese culture, including lotus flowers and dragonflies in Rihanna’s manicure as well as fans in her hair, hit a raw nerve.

“As much as I love Rihanna how is this not deemed as cultural appropriation?” one person asked, with another elaborating on the subject:

“So nodoby gunna call Rihanna out for cultural appropriation...hmm I see [sic]”.

Some instantly recalled a similar controversy around Kim Kardashian and her sister Kendall Jenner after the reality stars were recently also slammed for “cultural appropriation” – Jenner for appearing in a Vogue photo shoot wearing a hairdo that many believed resembled an afro, and Kardashian for her new shapewear line that she initially named Kimono, in a nod to her first name.

“Why is Kim not allowed to call her brand Kimono cos it’s cultural appropriation yet Rihanna can do s*** like this?? Just doesn’t sit right with me”, one person tweeted.

Many struck back arguing the target audience is Chinese and thus there is nothing wrong with the 31-year-old trying on Chinese national outfits and beauty accessories:

“Yall do know this is Vogue China right!?... what appropriation???? ....” one wrote, with another posting likewise:

“It’s not culture appropriation because this is for the Chinese magazine. The editors dressed her up. It’s appreciation not appropriation”.

“So why didn’t they put a Chinese icon?” another hit back at comments like those above.

“Damn some of you white people still don’t understand cultural appropriation at all so you can’t grasp why this is the exact opposite scenario”, a different user summed up, arguing that Rihanna’s (as the model’s) approach is actually the other way around.

This is not the first time that the Fenty Beauty founder came under fire for her glamour photo shoots. In 2017, the pop star triggered a storm in the fan base after she channelled Egypt’s legendary royal and beauty queen from the 1300s BC Nefertiti by wearing a snakeskin coat, metallic blue eyeshadow, and a blue-and-gold headdress.