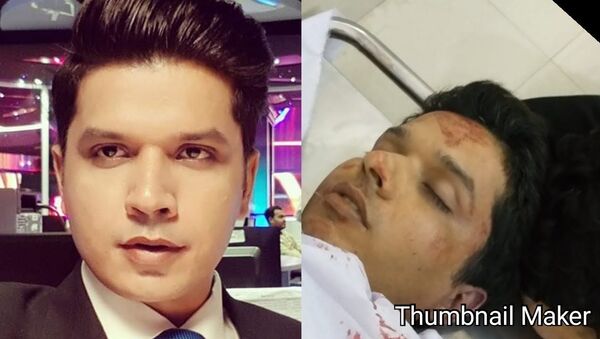 Mureed Abbas, a news anchor, was gunned down on Tuesday night in a high-security area of Karachi.

Police said he was working with the Bol News Channel of Pakistan and was killed over a personal dispute.

He was with his friend outside a café when Atif Zaman, allegedly shot them according to Pakistani media reports.

Initial investigations suggest that the accused had a monetary dispute with Abbas, and had asked the victim to a café in the city’s Khayaban-e-Bukhari area, under the pretext of returning the money he had borrowed. The accused shot Abbas and his friend down and fled the scene.

Senior Police official Sharjeel Kharal said, a police party raided the residence of the suspected killer, but he shot himself fatally in the chest, just as the police arrived.

Jinnah Post Graduate Medical Hospital confirmed Abbas was dead on arrival to the hospital with multiple bullet wounds on his chest and abdomen.

Saddened to know about the assassination of BOL TV young anchor Mureed Abbass. Share the grief of bereaved family and BOL TV administration. May Allah bless his soul. Aamen.

The incident has evoked a sharp response on social media, with many finding the country's political situation to be the root cause of the murder. One netizen called it "the murder of democracy" while others commented that the newscaster had been silenced for being vocal about the current political situation in Pakistan.

This is what I was talking about yesterday, & here you go! 👇

News anchor #MureedAbbas shot in Karachi. He has passed away.

The murder of #Pakistan's Democracy by its Army! https://t.co/hb2D4bbBge

#BREAKING | Pakistani journalist and TV anchor #MureedAbbas among four other shot dead in Karachi, Pakistan. #MureedAbbasKhar was silenced for being vocal over their current political situations and for raising issues of the assassination of Pakistan's former PM #BenazeerBhutto pic.twitter.com/o8TdHSosoa

There NEVER was any democracy.. it was a sham ARMYOCRACY all along. pic.twitter.com/qiBR0SoIag

There were reactions to the murder from both sides of the border.

#BOLNews anchor Mureed Abbas shot dead in Karachi...#MureedAbbas and Atif Zaman both are not there any more but the money and property still there... Big lesson to everyone... #Pakistan#news pic.twitter.com/V1Z4hqhxQo

An emotional Twitter user posted a video of the deceased playing with his son.

On 8 July, Pakistan’s electronic media regulator (Pemra) issued notices to 21 TV channels for airing unedited live telecasts of PML-N vice president Maryam Nawaz’s press conference on 6 July in Lahore, in which she claimed that a judge convicted her father under coercion.