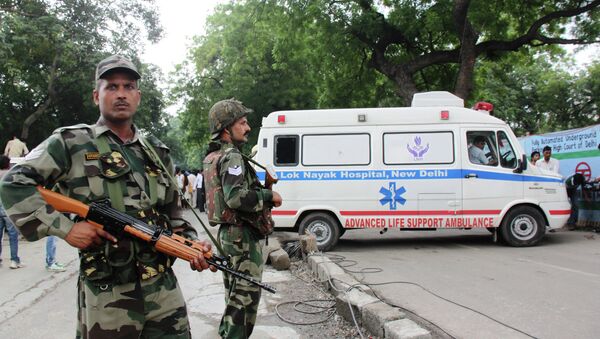 New Delhi (Sputnik) India's anti-terror probe agency National Investigative Agency (NIA) has busted a terror module linked to al-Qaeda in the southern state of Karnataka. Officials suspected that the members of proscribed Jamat-ul-Mujahideen Bangladesh were planning to hit scientific institutions across the state.

The module was busted a few days ahead of ISRO's second moon mission for which a countdown had already started at the southern launch facility. Based on intelligence reports,  Jamat-ul-Mujahideen Bangladesh (JMB)- an affiliate of al-Qaeda- has been planning to spread its network in South India, with an overarching motive to establish a caliphate.

"NIA recovered five fabricated hand grenades, one timer device, three electric circuits, suspected explosive substance, different components for making IEDs/rockets and several other incriminating materials", the agency said in a statement while adding that these hand grenades were made as a part of conspiracy to commit terrorist acts in different parts of the state.

The seizure was made from a place near Soladevenahalli Police Station, North District of Bengaluru after testimony given by a suspect named Habibur Rahman- member of proscribed Jamat-ul-Mujahideen Bangladesh (JMB).

Rehman was arrested on 25 June this year in a case related to a 2014 bomb blast in Burdwan in West Bengal. The arrest led to the discovery of a larger conspiracy to carry out several attacks in India and Bangladesh.

“While evading arrest as absconder, he was part of a JMB module which intended to wage war against the democratic setup of the state by conspiring to commit terrorist acts", the agency said, while adding that he and other JMB members had raised funds by carrying out thefts in Bengaluru in 2018.

On 2 July, the Ministry of Home Affairs stated in the Parliament that it had received “some inputs of Jamaat-ul-Mujahideen Bangladesh (JMB) using some madrassas (Islamic educational institutions) in Burdwan and Murshidabad for radicalisation and recruitment activities". Intelligence reports warned that the terror outfit is in the process of establishing a base close to India's eastern border in the states of West Bengal, Assam, and Tripura.