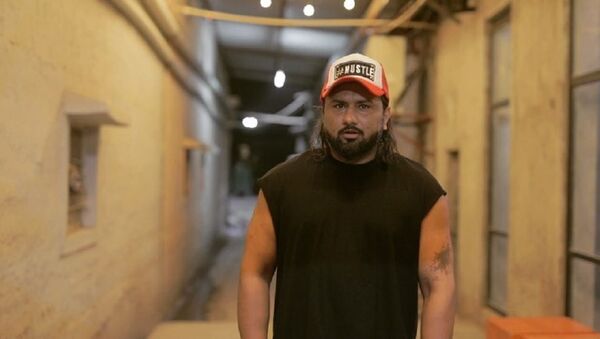 © Photo : yyhsofficial/instagram
Subscribe
New Delhi (Sputnik): Popular millennial rapper Yo Yo Honey Singh, who was recently called out for lewd lyrics in his song “Makhna” by the chairperson of the Punjab Women Commission, Manisha Gulati, appears to be heading for more trouble with a demand for his arrest.

The chairperson has now claimed that she is being targeted by the rapper’s ardent fans. Gulati said that she has been receiving abusive messages and threatening calls from Yo Yo Honey Singh’s followers since she lodged a complaint against the rapper and T-Series owner Bhushan Kumar.

"I have been receiving threat calls and getting abusive messages on my Twitter handle for lodging a complaint against Yo Yo Honey Singh", Gulati told media persons. "I am not scared of anyone. I will continue to raise my voice on such issues".

Gulati is now demanding the immediate arrest of the rapper, saying she would oppose all possibilities of him being bailed out.

She said it would be a lesson for singers like Honey Singh, who use sexist and vulgar remarks against women. Gulati said, “We will see that he doesn’t get bailed out if he pleas for it”.

A day after the state #police booked rapper #YoYoHoneySingh and producer #BhushanKumar over lewd lyrics in the singer’s new song, #Punjab State Women Commission #ManishaGulati on July 10 demanded a censor board for songs too.
Photo: Manisha Gulati pic.twitter.com/nDaI2QEXcL

Gulati has also urged Punjab Chief Minister Amarinder Singh to set up a state censor board to regulate songs and ensure that such objectionable and lewd lyrics are not used in songs.

On 9 July 2019, Singh was booked for lewd lyrics of his song like "Mein hoon womaniser"- “I am a womaniser” and "Silicon wali ladkiyon ko mein pakadta nahi" – "I don’t touch silicon girls". The popular song on T-Series' YouTube page has over 20 million view and 2.9 million likes.

Thank God !!! it was not Aazam Khan !!!
Trouble mounts for rapper Yo Yo Honey Singh, Mohali police booked the singer for 'vulgar' lyrics in 'Makhna' https://t.co/HRpzS0kCZc

Punjab State Women Commission Chairperson Manisha Gulati said she has lodged a complaint against #YoYoHoneySingh for using lyrics like "Mein hoon womaniser (I am a womaniser)" in the song #Makhna.

I too had problem with the valger lyrics of this song.😠

​Singh has been booked under Section 294 (punishment for obscene song and acts) and Section 509 (punishment for word, gesture or act intended to insult the modesty of a woman) of the Indian Penal Code.

He was also charged under section 67 (punishment for publishing or transmitting obscene material in electronic form) of the Information Technology Act, 2000 and a relevant section of the Indecent Representation of Women (Prohibition) Act, 1986.