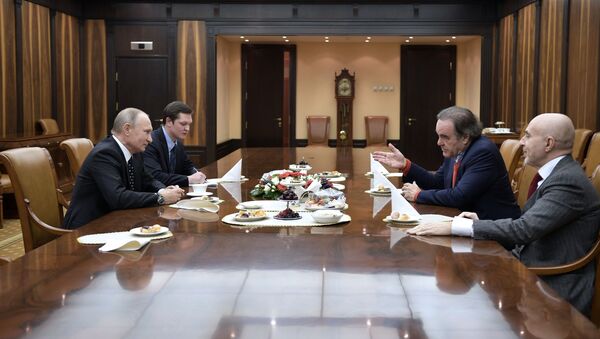 © Sputnik / Aleksei Nikolsky
/
Go to the photo bank
Subscribe
MOSCOW (Sputnik) - Russian President Vladimir Putin said in an interview with US film director Oliver Stone that he did not interfere and is not going to interfere in the elections in the United States.

“I didn’t interfere then, and I don’t want to interfere now, and I don’t intend to do it in the future,” he said in an interview for Stone’s new film Revealing Ukraine, which was shown at the Taormina Film Fest in Italy.

The Russian president proceeded by saying that Russian bloggers, whatever point of view they expressed on the Internet, could not have played the key role in the US elections.

"If you want to return to the elections in the United States again, well, listen, a huge country, a huge people with their own problems, with their own ideas about what is good and what is bad, with the understanding that... in the previous few years - ten years, for example - with a huge increase in the well-being of the ruling class and rich people, nothing has changed for the better for the middle class," Putin said in an interview for Stone’s new documentary Revealing Ukraine, shown at the Taormina Film Fest in Italy.

"This was this circumstance that was understood by those who conducted the election campaign of Mr. [Donald] Trump, and he himself understood it. And he used this... No matter what Russian bloggers, I do not know who works on the Internet, no matter how they expressed their views on the situation in the United States, this could not have played the key decisive role. This is nonsense," he said.

Putin on Relations With Ukraine

Russia and Ukraine will inevitably grow closer and become allies, Russian President Vladimir Putin said in an interview with US filmmaker Oliver Stone.

000000
Popular comments
Stone is good and he has a rapport with Putin that no other western person has. he is willing to listen and listen he does and putin can tell the world how the cookie crumbles and not one single person in the white house or pentagon (maybe a bit) and the state dept has the ability to listen to what common sense dictates. people like bolton and pompeo are in the way.
mandrake
9 July 2019, 19:24 GMT5
000000
At least he has the guts to face the world and speak without a forked tongue.Unlike the cowards in the west who lie cheat and steal.
Aramis
9 July 2019, 19:41 GMT4
000000
Newsfeed
0
New firstOld first
loader
LIVE
Заголовок открываемого материала
Access to the chat has been blocked for violating the rules . You will be able to participate again through:∞. If you do not agree with the blocking, please use the feedback form
The discussion is closed. You can participate in the discussion within 24 hours after the publication of the article.
To participate in the discussion
log in or register
loader
Chats
Заголовок открываемого материала
Worldwide
InternationalEnglishEnglishMundoEspañolSpanish
Europe
DeutschlandDeutschGermanFranceFrançaisFrenchΕλλάδαΕλληνικάGreekItaliaItalianoItalianČeská republikaČeštinaCzechPolskaPolskiPolishСрбиjаСрпскиSerbianLatvijaLatviešuLatvianLietuvaLietuviųLithuanianMoldovaMoldoveneascăMoldavianБеларусьБеларускiBelarusian
Transcaucasia
ԱրմենիաՀայերենArmenianАҧсныАҧсышәалаAbkhazХуссар ИрыстонИронауОssetianსაქართველოქართულიGeorgianAzərbaycanАzərbaycancaAzerbaijani
Middle East
Sputnik عربيArabicArabicTürkiyeTürkçeTurkishSputnik ایرانPersianPersianSputnik افغانستانDariDari
Central Asia
ҚазақстанҚазақ тіліKazakhКыргызстанКыргызчаKyrgyzOʻzbekistonЎзбекчаUzbekТоҷикистонТоҷикӣTajik
East & Southeast Asia
Việt NamTiếng ViệtVietnamese日本日本語Japanese中国中文Chinese
South America
BrasilPortuguêsPortuguese
NewsfeedBreaking
07:53 GMTChina Urges US to Respect Commitments on Taiwan in Response to Blinken's UN Statements
07:47 GMTFrance and Bayern Munich Player Lucas Hernandez Spared Jail Term
07:42 GMTUS Regulator Bans China Telecom America Over 'Significant' National Security Risks
07:38 GMTGerman Regulator to Consider Nord Stream 2 Network Independence
07:15 GMTCan Ole Gunnar Solskjaer Save His Manchester United Job?
07:06 GMTPrince Andrew's Lawyer Asks to Keep Epstein's Settlement With Virginia Giuffre Sealed
06:47 GMTDanish Health Minister Demands More Vaccinations to Avoid New Lockdown
06:42 GMTEx-Lehman Brothers Exec Predicts Three More Years of Inflation, Tech Stocks to 'Get Crushed'
06:39 GMTUS Senators Ask Biden to Waive CAATSA Sanctions Against India for Buying S-400 Missile Systems
06:28 GMTIsrael Plans to Allow Entry for Sputnik V-Vaccinated Tourists From 15 November, Source Says
06:18 GMTPoll: 6 in 10 Americans Say Oil, Gas Companies Bear Brunt of Blame for Climate Change
06:14 GMT'Worst Prepared': Denmark's Solo Mission Against Piracy Off the Coast of Africa Meets Criticism
06:06 GMTLondon Court Holds Hearing on US Appeal of Assange Extradition Case
05:51 GMTUK Budget and Spending Review: Sunak May Announce Britain Preparing for 'New Economy Post-COVID'
05:09 GMT'Pyramid Scheme': Project for Women-Only Island in Finnish Archipelago Fails to Materialise
04:00 GMTBoJo's National Insurance Tax Rise May Hinder Post-COVID Recovery, Cause Unrest in UK, Scholars Warn
03:42 GMTChina May Have the Edge in the Final Frontier With Its 'Satellite-Crushing' Weapon
01:50 GMTCongress to Get Tough on Armed Services After 2,000 Military Firearms Stolen During the 2010s
01:21 GMTOld Habits: Big Tobacco's Annual Cigarette Sales Increase for First Time in 20 Years, FTC Reports
01:00 GMTBlinken Speaks to Sudan's Prime Minister, Welcomes His Release - State Dept.