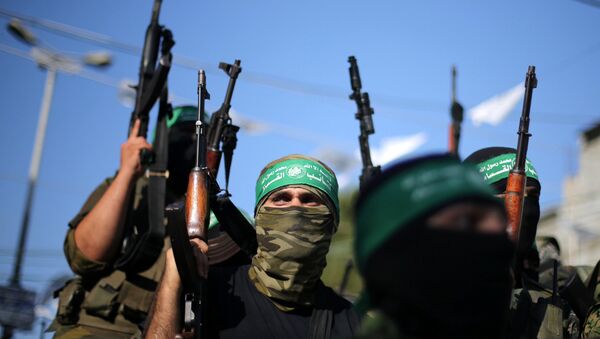 Hamas, the Palestinian party that governs the Gaza Strip, performed a snap training exercise Tuesday morning that rehearsed an Israeli invasion of the enclave.

According to a Tuesday announcement by Hamas’ Interior Ministry, the drills aimed “to test the readiness” of its forces "for a scenario of an extensive attempt to harm public order and stability in the Gaza Strip.” The drill involved police, intelligence units and the al-Qassam Brigades, Hamas’ paramilitary wing, the Times of Israel reported.

“The Interior and National Security Ministry is currently carrying out an emergency drill to simulate dealing with a sudden security threat,” Interior Ministry spokesperson Iyad al-Bozm wrote on Twitter. “It is taking place in the framework of examining the preparedness of the security forces and services.”

Hamas terror group launched a large-scale surprise drill to test the readiness of its terrorists for the next war with Israel. The alert level was raised to its highest and all the terrorists were called up for duty. https://t.co/IzRMpURgV2 pic.twitter.com/Ujf5nxMuhK

​According to the Times of Israel, the drill involved suddenly raising the alert level among all security agencies across the 25-mile-long territory, which at its widest is only six miles across. Reserve personnel were mobilized, roadblocks were set up, and all land crossings and seaports were closed.

Observers noted the quick reactions by all parties. “In less than 10 minutes all troops were mobilized and the land and sea borders and the governorates and roads and the border were all closed,” an activist wrote on Twitter.

​At the climax of the drill, Gazan forces “captured” an Israeli special forces team that had penetrated the territory, Haaretz noted. The drill was likely based on the very real raid last November in which an Israel Defense Forces special forces team was discovered inside Gaza near Khan Younis. In the ensuing shootout, one Israeli soldier and seven Gazans were killed. An internal IDF probe revealed on Monday the IDF soldier was felled by friendly fire.

Israel “has seen the power of the resistance in the battle in Khan Younis, whose results continue to shake the foundations of the Israeli defense establishment and military,” Hamas said in a statement, according to the Times, adding that “the resistance has additional powerful capabilities it has not yet revealed.”

The drills also come less than a week after Israeli Prime Minister Benjamin Netanyahu said that Israel was “preparing for a large-scale military operation, if necessary."

Although Israel and Hamas previously exchanged rounds of missile attacks, the two sides arrived at a ceasefire agreement in mid-May. However, irregular attacks by methods such as incendiary balloons have continued, prompting Israel to cut off Gaza’s fuel access and restrict the limit for fishing boats to 10 nautical miles from shore.

On Tuesday, Israeli Public Security Minister Gilad Erdan said Israel “came close in recent weeks to the possibility of a military operation in Gaza, but it very much depends on what Hamas does in the coming weeks,” Haaretz reported.