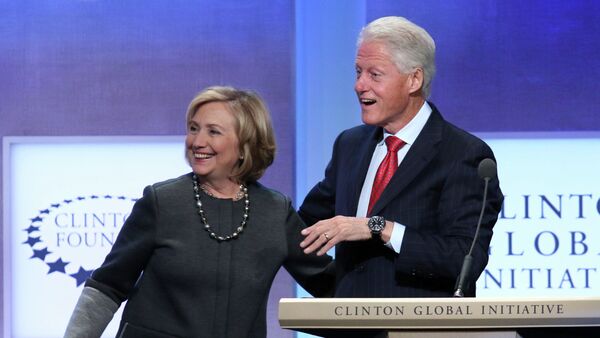 Ekaterina Blinova
All materialsWrite to the author
The Clinton email scandal needs further examination as it may shed light on the roots of the Obama-era foreign strategy in Libya, Egypt and Syria, as well as help answer the question why the previous administration turned a blind eye to the Clinton charity controversy, the Uranium deal and the Benghazi case, says Wall Street analyst Charles Ortel.

The Hillary Clinton emailgate case has yet again come into the focus of public attention as the right-wing Equal Justice Tour group filed a formal complaint with the New York-headquartered New Castle Police Department on 6 July, calling for criminal charges to be brought against the former secretary of state.

While the initiative, live-streamed on Facebook, was mocked by some users who claimed that Hillary's opponents "need to stop" since it had been 32 months since she lost the 2016 presidential election, Judicial Watch's inquiry into the case indicates that emailgate is by no means a thing of the past.

Charles Ortel, a Wall Street analyst and investigative journalist, has raised the question about then President Barack Obama's failure to prevent the Clinton team's apparent arrogance and explained why the Obama-era Middle East policy in Libya, Egypt and Syria deserves further scrutiny.

Sputnik: The right-wing Equal Justice Tour group filed a formal complaint against Hillary Clinton over the emailgate case and launched a petition, saying that the former secretary of state should be "held accountable for wrongdoing at the Clinton Foundation, Benghazi, Haiti, Email Destruction and Uranium One". Could this initiative bring any tangible results? How does it reflect the US public opinion with regard to Hillary Clinton?

Charles Ortel: After decades, when allies across the political spectrum shielded the Clintons from prosecution for a raft of alleged crimes, the future is looking bleaker and bleaker for this “dynastic” and grasping political family.

And, we know that multiple House and Senate investigations have struggled, unsuccessfully to date, to understand how Hillary Clinton was given such wide latitude to operate the State Department while Bill Clinton was simultaneously gallivanting around the world seeking favours from foreign governments, and working with wealthy US and foreign investors, in the guise of “charity”.

One major difference in July 2019 is that many rivals in the Democratic Party are certain that Hillary Clinton is too toxic to defeat even a wounded Donald Trump, should the US economy spiral downward in 2020, as happened in 2008 right before the November elections.

To me, it seems increasingly likely that a swelling coalition of anti-Hillary Democrats, conservatives and independents will raise their combined voices and demand answers about the topics you mention, justice for alleged crimes committed by the Clintons and their false-front charities and reform of laws that govern charities and attempt to lessen corruption in politics.

Sputnik: Prior to the Equal Justice Tour's police request, Judicial Watch (JW) reported on 2 July that former Director for Information Programs and Services (IPS) John Hackett had testified under oath that he had raised concerns over then Secretary Clinton's staff "culling out" 30,000 emails in violation of strict National Archives standards. Hackett also said that he believed that there had been interference with the formal Freedom of Information Act (FOIA) review process related to the classification of Clinton’s Benghazi-related emails. According to JW President Tom Fitton, Clinton email witness evidence is "more than enough" for the DOJ to reopen the email investigation into Hillary Clinton. What is your take on John Hackett's testimony? Could these new materials collected by JW force the DOJ to reopen the case?

Charles Ortel: Why Hillary Clinton, a bitter rival of Barack Obama, was selected to be secretary of state and why she and her team were given so much freedom to operate the State Department outside normal channels are questions that deserve even more attention than Judicial Watch relentlessly has devoted to uncovering important truths.

​The secretary of state and senior staff are privy to information that holds enormous potential value to executives, to investors, and to geopolitical rivals and enemies. This information is normally transmitted, when it is sensitive, over secure systems under protocols, regulations, and laws that carry stiff penalties for even a single violation, let alone a demonstrated pattern and practice of recklessness and contempt.

Yet another Clinton email drop in FBI Vault. Unclear who’s 302 this is but on May 3, 2016 they freely talk about how often they use Bleach Bit and casually mention Cheryl Mills requested a secure delete of laptops. Unreal.
cc: @GOPPollAnalyst https://t.co/3cDPwaFhK5 pic.twitter.com/J8sUr6vreD

​By 10 July 2015, well before the primary season began in the last election cycle, the FBI opened a criminal investigation of Hillary Clinton and others into mishandling of classified information during and after her tenure as US secretary of state.

Hackett may be the person who sent a letter to FBI Director James Comey in January 2016 complaining about Hillary Clinton’s practices while running the State Department, or he may be yet another person who was concerned about her behaviour and that of her colleagues.

My question is why did Barack Obama tolerate this behaviour? As a guess, because he too either emailed using an alias and/or through a private server, as may have other senior government officials including, perhaps, Robert Mueller and Comey.

Sputnik: Do you think that Hackett's testimony could turn the spotlight on the Benghazi case again? In May 2015, JW revealed that it had obtained more than 100 pages of previously classified “secret” documents from the Department of Defence (DOD) and the Department of State revealing that the DOD almost immediately reported that the assault on the US Consulate in Benghazi was committed by the al Qaeda and Muslim Brotherhood-linked "Brigades of the Captive Omar Abdul Rahman" (BCOAR), and that the attack had been planned at least 10 days in advance. Does the Obama-Clinton Mid East policy deserve further scrutiny, in your opinion? Will the Benghazi case resurface again, in your view?

Charles Ortel: Absolutely! American taxpayers, and those of us who hope to live in a civilised world deserve to understand just how the United States and [its] allies fomented regime change across the Middle East under President Obama and Secretaries of State Clinton and [John] Kerry, knowing how poorly this “strategy” “worked” in Iraq and Afghanistan under President George W. Bush.

​America’s Founders, wounded by decades of strife in England under kings who did not answer to their “subjects”, drafted the Constitution to ensure that wars would only be declared following rigorous debate, by the assent of our House of Representatives – the body closest to the electorate.

How the US ended up toppling [Libyan leader Muammar] Gaddafi, how we supported Mohammad Morsi in Egypt, and how we ended up backing insurgents in Syria are issues that must be explored, ideally in public hearings where witnesses are called to testify under oath.

An especially troubling aspect of this inquiry is the role that the Clinton Foundation, and donors to it, may have played during the period 20 January 2009 forward. For example, what were Gehad el-Haddad and Huma Abedin doing in Egypt and elsewhere in the Middle East while each was affiliated with the Clinton Foundation?

For that matter, who authorised Huma Abedin to have a US security clearance of any kind, given her background and family connections? [According to Al-Arabiya, Huma's mother, Saleha Mahmoud Abedin, was a member of the International Union of Muslim Scholars, chaired at the time by Dr Yusuf al-Qaradawi, who was later banned by Saudi Arabia, UAE, Bahrain and Egypt for his support of the Muslim Brotherhood* – Sputnik].

What actually happened at Benghazi and across the Middle East beginning in 2009 is likely to stain the reputations of many, likely including John Brennan, John McCain, Valerie Jarrett, Barack Obama, Hillary Clinton and others, especially in the “mainstream” media who have, until now, refused to perform objective investigative journalism.

Sputnik: On 4 July, The Daily Caller wrote that Hillary Clinton had withdrawn from the cyber-security conference where she was scheduled to be the keynote speaker, citing an email from the FireEye Cyber Defence Summit scheduled for October 2019. It was initially expected that Clinton would engage in a Q&A discussion with FireEye CEO Kevin Mandia on the geopolitical landscape and its implications for global cyber security. The Daily Caller noted that a source close to FireEye said that "something [was] up" with the Clinton speech. Why did Hillary Clinton withdraw from the event? Was she afraid of inconvenient questions, in your opinion? Do the latest developments indicate that Hillary Clinton is losing grip and "immunity"?

Charles Ortel: Heat is rising against the Clintons from many directions – today, for example, the Epstein case roared back into public attention and should trigger renewed focus concerning that convicted sex offender’s active role with Bill Clinton taking the Clinton Foundation far afield from its authorised tax-exempt mission as a Presidential Library in Little Rock, to “fight HIV/AIDS”, “climate change”, and promote economic development internationally.

It is tough to say who was more foolish – the CEO of FireEye, or Hillary Clinton for agreeing to speak and answer questions at a summit where questions of cyber security would be in focus. Certainly from what we know so far, the approach taken by Hillary Clinton and her team while she was secretary of state “handling” America’s top secrets over unsecure “systems” using unchecked electronic devices was appallingly neglectful. Why would anyone value her opinions on the topics that may be discussed at the forthcoming conference?

Hillary, Bill, and Chelsea Clinton have been insulated from inquiries that are long overdue. Barring unforeseen developments, justice seems to be nearing for them, for their allies, and for too many donors to their “charities” who failed to do proper diligence into the legal status and defective public reports of improperly organised and operated tax-exempt entities scattered worldwide.

On 2 July, Judicial Watch published a testimony of John Hackett, who served as the director for Information Programs and Services (IPS), a division that supervises records management at the State Department, from April 2013 to March 2016. Hackett revealed that at that time he had raised concerns over criteria used by the Clinton team to segregate 30,000 from 60,000 emails stored on the Clinton private server for destruction and that he was not sure that Hillary's team followed strict National Archives standards while doing this. Hackett also reported about the allegedly "inappropriate" interference by some government officials with the formal FOIA review of Hillary Clinton’s 296 emails related to the 2012 Benghazi attack that were made available to Congress in 2014.

"Some bureaus were convinced, or — and analysts were convinced, once it was explained to them, to redact something, but use a B5 exemption [which applies to deliberative process and allows government officials to discuss policy without the discussions being made public, or attorney-client privilege] versus a B1 [national security] exemption", Hackett said.

*The Muslim Brotherhood is a terrorist organisation banned in Russia.