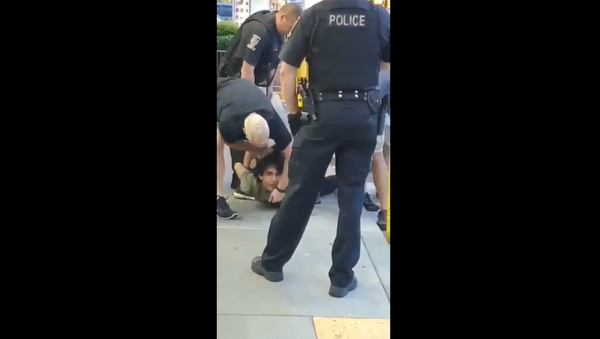 The brutal arrest unfolded during the evening of July 3 at Silver Spring’s Aspen Hill Shopping Center off of Connecticut Avenue. At the time, plainclothes officers from the department’s 4th District were investigating 19-year-old Arnaldo Pesoa, who was suspected of selling psilocybin mushrooms.

According to a Friday press release from the department, the situation quickly escalated when officers attempted to arrest Pesoa for the attempted sale of a controlled dangerous substance. It says that the teenager continued to be disorderly with officials even after being removed from a nearby restaurant.

​Video shared on social media shows plainclothes officer Kevin Moris, of the 4th District Special Assignment Team, forcibly kneeing Pesoa in the back of his head, smashing his face into the concrete, seconds after the teenager yells out several expletives.

“F**k! F**k! You hit my f**king head,” Pesoa is heard yelling at Moris before informing the officer he spit on his foot. The remainder of the video shows Moris covering Pesoa’s face with his shirt as the officer continues to readjust his grip on the teen’s head by grabbing onto his hair. The footage ends with officers ordering Pesoa to stand up.

A probe into the arrest is ongoing. Moris’ use of force is being investigated by the department’s Criminal Investigations Division, and is expected to be referred to the Montgomery County State Attorney’s Office for review.

000000
Popular comments
USA cops are trained in the delusional war criminal run Israel. What should we expect when terrorists train our cops.