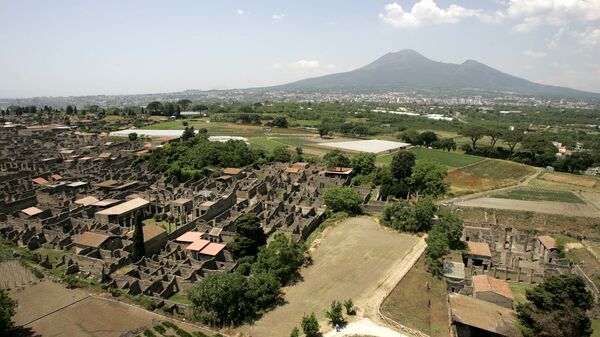 The ancient Italian city that witnessed a catastrophic volcano eruption 2,000 years ago and remained buried in ashes for ages is one of the world’s most visited archaeological sites. The renowned city, however, might conceal not only artifacts from the Roman Era but also explosives from more recent and tragic times.

At least 10 unexploded bombs, dropped by the allied forces on Pompeii in 1943 during the Second World War, remain in the historical area, Italian newspaper Il Fatto Quotidiano suggests. The outlet has studied documents from the National Aerial Photographic Archive, including a bombing map, and interviewed archaeologists and historians to find out if one of the world’s most popular archeological sites is a sort of a minefield because the whereabouts of the some explosives is still unknown.
According to journalists, the allied air forces dropped 165 explosives on the ancient city on 24 August 1943, the very day Vesuvius erupted in AD79.

Over the years, 96 bombs were located or defused in the area, while many were deactivated or even exploded themselves. But some are yet to be uncovered in an unexplored area encompassing 22 hectares, as there is no information on them in official documents.

The newspaper cites professor from Suor Orsola Benincasa University of Naples Antonio De Simone, who discovered one of these WWII “artifacts”, while excavating the ancient Roman city in 1986.

"We were there with our chisels and shovels, slowly lifting a handful of earth at a time, and suddenly we found the bombs, under our feet. There were two of them. One had already exploded and was reduced to fragments. The other, unfortunately, had not. It was perfectly intact”, he revealed.

However, as the Archaeological Museum of Pompeii stated, visitors are safe in the area and there is no risk to them, as they are allowed in the cleared territories.

Mt. Vesuvius, meanwhile, might pose even a greater danger because it is said to be active to this very day and is kept under 24-hour surveillance “due to the ever-present danger”.

The city of Pompeii was ultimately buried underneath a thick layer of volcanic ash, along with the majority of its residents who failed to escape one of the most famous and deadly volcanic eruptions in European history, which killed over 2,000 people. A newly found inscription, uncovered in October 2018, suggested that the city was entombed after 17 October AD79.

The Roman city-turned gigantic museum was re-discovered in the 16th century. Excavations began some 200 years later and have been going on ever since.