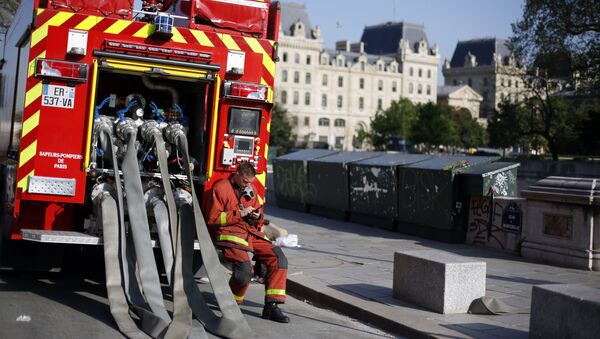 Seven French firefighters’ unions called for a strike this summer to denounce the difficult working conditions and lack of funding.

The situation risks affecting not only extinguishing fires – firefighters in France also serve as paramedics. In 2017, firefighters respond to 400,000 more fires than in 2012 despite the fact their resources haven’t increased.

According to firefighters, they are victims of fiscal tightening, which has been applied for several years in France. “More operations, fewer staff, closing or merging barracks… The system is out of breath. All this leads to longer response times,” Rémy Chabbouh says.

“It’s all interlinked. Hospitals are closing everywhere; some areas lack doctors etc. All this concerns us. During flu season, people quite often call firefighters to help their coughing kids. This is de Noémie Syndrome (syndrome de Noémie), named after this girl who died last year after an ambulance (SAMU - Service d’Aide Médicale Urgente) didn’t respond to the emergency call. The scandal was so huge that everyone is afraid now. Today, you can call firefighters to help any child whose nose is running,” he adds.

According to Le Monde, the Ministry of the Interior is thinking about easing the workload of firefighters: “Working groups are thinking about ways to reduce pressure at the level of reception people in need. such as the reconciliation between the ARS (Regional Health Agencies, Agences Régionales de Santé) and the SDIS (Departmental Fire and Rescue Services, Services Départementaux d’Incendie et de Secours), or the reduction of firefighters’ waiting time in emergency departments.”

“We are on the right track. But a big problem still remains. Firefighters don’t decide where they will take the victim; it’s SAMU that decides. Thus, there’re absurd situations. For example, a pregnant woman calls the fire department at 2 a.m. because she is about to give birth. Imagine she lives near the clinic of Rieu, in the Lyon region. The hospital is perfectly capable of taking care of that woman. However, if she was examined at another hospital, a few dozen kilometres away, the firefighters will be forced to take her to that clinic. At times of digital patients’ clinical records, this still raises questions,” Rémy Chabbouh comments.

“The Ministry of Health is playing alone. I’m totally against this situation, even though I am not here to hit on our colleagues, who are also striking. Still, I have been a trade unionist for 20 years; and for 20 years these health people have been doing what they want. Firefighters no longer want to be under the SAMU. We have never been able to objectively and specifically discuss these issues with them. The reality is that today we are doing the job we should not be doing. Beyond the vital emergency responses, we perform a number of tasks that are not our duties. For example, an isolated rural barracks has only one ambulance. Due to the lack of funds, the SAMU asks the firefighters to provide transportation for a person who is not in danger of death. While the firefighters take care of this person, another person suffers a cardiac arrest; but there’s no ambulance to take them to hospital.”

There’s one more problem firefighters face – an increasing number of attacks. In December 2018, the National Observatory of Delinquency and Criminal Responses (ONDRP) published some shocking statistics. Between 2008 and 2017, attacks against firefighters tripled (+213%), reaching 2,813 in 2017. If we recall that in 2016 the number of attacks against firefighters amounted to 2,280 in 2016, this figure represented a 17.6% increase over the previous year; and this is a cause for concern.

“We are asking for stricter criminal policy regarding attacks against firefighters. There are still too many stopped proceedings or soft sentences. We are facing a problem of minors who often hurl stones at firefighters. It’s a social problem. On the other hand, when adults, victims or their relatives attack firefighters, they must be severely punished. We need exemplary sentences that will say: “Don’t attack firefighters.” In addition, there is work to be done on the provision of evidence to firefighters. We had been promised the experiment with individual cameras, the ones police has, in order to film our operations. Today, only a few departments are equipped with these devices. However, this would improve the situation,” Remy Chabbouh said.

In July 2018, a bill was passed on a three-year experiment for firefighters to wear individual cameras; the results of the experiment will be evaluated after this period. However, the bill provides for certain restrictions, such as the entire operation cannot be recorded, recording should stop as soon as there is a risk of disclosing medical confidentiality.

“We should resume the pedagogical approach. For several years we have identified risk areas and neighbourhoods. Previously, firefighters communicated with young people in schools and associations. And today violence has become commonplace. The problems are no longer concentrated only in certain neighbourhoods, but all social classes are concerned. People have become demanding. Sometimes they show verbal or physical abuse. We haven’t yet found a solution. People must be held accountable. They should be explained that they cannot call firefighters for any reason and that they should be patient. The current situation is the result of many years of political failures. Services are close, areas appear that lack doctors. For years, we have sounded the alarm saying: “Warning! Where there are no more doctors, they call firefighters.” The whole system needs to be revised. We pay a lot of taxes in this country. It’s time for this money to be better used.”

Firefighters are also asking for an increase of the premium to 28% against the current 19%. “The police have 26%. They [the state] should acknowledge our job and its risks,” Jérôme François, Secretary General of UNSA SDIS, told Le Parisien.

“Firefighters are sometimes equipped with heavy helmets and bullet-proof vests. We perform missions that didn’t exist a few years ago, let alone 27 years ago when I entered the business. Some firefighters can join the police in order to extract the victims in case of mass killings. There have been certain measures regarding the police and emergency doctors, but we have been left behind – there’s something wrong. We should raise the profile of our profession, and we should do that not only during commemorations for our dead. We’d like to have more recognition when we are still alive, and we want something other than medals,” Rémy Chabbouh claims.

The Ministry of Internal Affairs said that “protests will not affect the service of our fellow citizens”. Moreover, according to Le Monde, no massive recruitment is the order of the day; nor is the premium increase. “That would cost €130 million and the departments don’t have this much money for that,” Olivier Richefou, President of the National Conference of SDIS, told Le Monde. 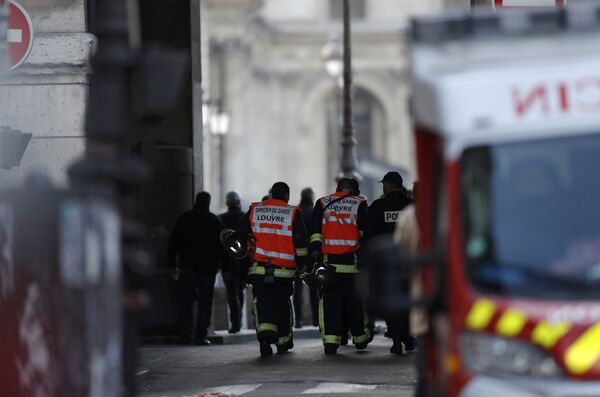 French firefighters and police are seen at the site near the Louvre Pyramid in Paris, France, February 3, 2017 after a French soldier shot and wounded a man armed with a knife after he tried to enter the Louvre museum in central Paris carrying a suitcase, police sources said.
© REUTERS / Christian Hartmann

At the same time, he mentioned the establishment of a single platform for emergency services, requested by firefighters. Still, we know that the government has recently made financial concessions to police and emergency doctors. Are firefighters scorned?

“Yes, we think it’s a bit like that. We want clear explanations and justifications. We are not jealous of what the police and the emergency doctors have got, because that won’t be enough anyway. You cannot buy people. We don’t want a bonus to get back to work; we want funds for decent work and recruitments. The state relies too much on volunteer firefighters, but by definition they have their own jobs. We know that we won’t be able to use professionals everywhere, but at some point, there are choices to be made and a political courage to have,” Frédéric Perrin says.

Rémy Chabbouh wants to give the government a chance:

“We don’t feel the same as our colleagues from other unions. We had some very constructive meetings with the authorities. Of course, we haven’t succeeded in everything, but have developments on some points. Everything stopped six months ago. We don’t really understand why heavy artillery has been pulled out. We are still in favour of a dialogue. We were recently received by the President of the ADF, the Association of French Departments, and the meeting went very well.”

However, he considers the figure of €130 million euros provided by Olivier Richefou surprising: “It seems to me that he’s taken it a little bit too far.”

The new season may be explosive for the government. Given reforms of unemployment insurance, the civil service and pensions, the peak season for social protests is not excluded. The association of trade unions that called for the firefighters to strike doesn’t rule out street protests in September if it’s not heard during the summer.

“We are particularly concerned about pension reform. The diseases that firefighters could have at the end of their career in the past are found much earlier today. Our job is one of those with the shortest life expectancy in retirement. We want to know how the specificities of our dangerous job will be taken into account. Currently, we’ve received no response. We have the impression that the government doesn’t know where it is going,” Frédéric Perrin says.

“A social dialogue with those in power is impossible. The bill [on the transformation of the public service] will be adopted, but the problems regarding the purchasing power and tasks of civil servants will not be resolved until the new season,” Jean-Marc Canon from the CGT, recently said:

Some Yellow Vests also promise new protests in September. Could we see the firemen getting involved? Rémy Chabbouh doubts this:

“Yellow Vests have repeatedly called us to join them, but we never agreed. We have different demands; we have a strongly developed corporate spirit. We don’t have the same problems as a town hall secretary, for example. I think we should stay within the framework of our profession. Will the protests continue in the new season? Probably, let’s first give a chance to dialogue.”