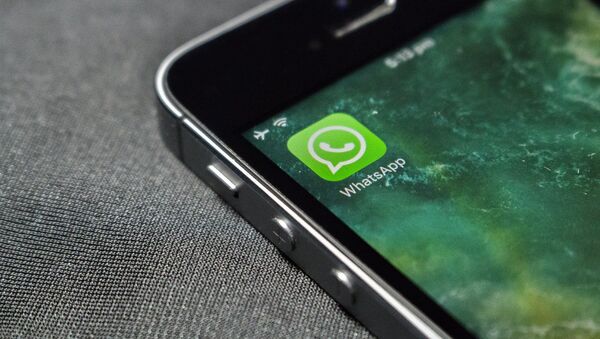 The damning info was reportedly leaked to the media by the Hezbollah Brigades, an Iraqi Shia paramilitary group which fought against the US during the Iraq War, and against Daesh (ISIS)* and other terrorist groups operating in Syria during the civil conflict in that country.

Maj. Gen. Mahmoud al-Falahi, commander of the Anbar Operations Command in western Iraq has been passing information to an Iraqi national working for the US Central Intelligence Agency, Iran's Fars News Agency has reported.

According to Fars, details of al-Falahi's secret conversations were leaked by Kata'ib Hezbollah, also known as the Iraqi Hezbollah Brigades, who released audio files and screenshots of WhatsApp chats the group claims shows communication between the commander and the CIA agent.

The confidential information was said to be related to Iraq's Popular Mobilization Forces, an umbrella paramilitary force consisting mostly of Iraqi Shia Muslim militias formed in June 2014 to fight Daesh.

According to Fars' analysis of the conversations, the CIA agent reportedly asked al-Falahi to give him details about Popular Mobilization Forces bases along the borders between Iraq and Syria, which he claimed would be subjected to attacks "by the US and Israeli air forces."

The agent also asked al-Falahi to meet with US military and intelligence officials in Erbil, a city in Iraqi Kurdistan, or at the US forces base in al-Habaniyeh in western Iraq.

al-Falahi reportedly complied with the requests for information, and gave the CIA detailed coordinates about bases in al-Anbar province, where he serves as regional commander of Iraqi ground forces. The Hezbollah Brigades blasted al-Falahi over the compromising files and accused him of "plotting" against "the Iraqi army, security, the Popular Mobilization Forces and resistance forces." According to the militia, his actions also posed a threat to the national security of Iran, which has provided the Popular Mobilization Forces with support in their war against Daesh.

In a statement on the alleged leak, Hezbollah Brigades spokesman Mohammad Mohie accused US diplomats of trying to smuggle al-Falahi out of the country. "The US Embassy should be condemned for its role in Iraq as well as the US forces. We have been in a confrontation with Washington ever since its entry into Iraq because of the crimes it committed. America cannot be trusted or dealt with properly," Mohie said, his comments reported by Lebanon's al-Mayadeen news agency.

According to al-Mayadeen, Iraq's Defence Ministry has ordered the creation of a commission to investigate the recordings.

Under Iraq's military penal code, espionage is punishable by death.

US officials have not commented on the Hezbollah Brigades' claims. The group is designated as a terrorist organization by the US, the UAE and Japan.

Relations between Iraq's US and Popular Mobilization Forces have deteriorated in the aftermath of Daesh's defeat in the region. In January, the militia group reportedly stopped the US military from conducting "suspicious" reconnaissance operations near the Syrian border, accusing them of "provocations" including gathering of "secret intelligence on the border" in areas under PMF control. US troops and PMF forces have generally committed to avoid operating in the same areas amid longstanding tensions stemming from the aftermath of the 2003 invasion.