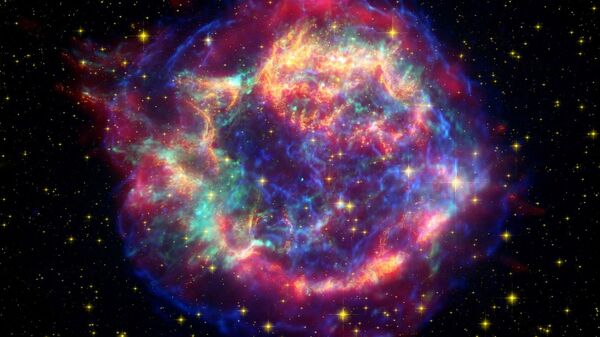 © Photo : NASA/JPL-Caltech/STScI/CXC/SAO
Subscribe
While some stars completely vanish once they reach the end of their “fuel reserves”, exploding outward in what's known as a supernova event, some mysteriously get a second chance at life.

Scientists have announced the discovery of three “zombie” stars that continue to smolder after their cores exploded, in a study published in the Monthly Notices of the Royal Astronomical Society.

Using data from the European Space Agency's Gaia space telescope, the team identified the mysterious celestial objects, dubbed “zombie” stars for their ability to live on even after their core explodes, by their unique signatures: the white dwarfs are less dense than their counterparts, and consist of oxygen and neon.

Another feature of them stands out: two of the three were travelling at breakneck speed across the Milky Way Galaxy, with the third “zombie” travelling in the opposite direction to other stars in the galaxy.

Earlier, scientists established that some stars just vanish upon reaching the end of their fuel reserves, dying in a burst of stellar material across the galaxy in what’s known as a supernova, while others get a second chance at life.

In the newly discovered type of supernova called a “type lax” the explosions move slower and dissipate more quickly.

According to scientists, studying the rare type of star might offer them clues to the phenomenon that leads to their creation - supernovas.

Supernovas, like zombie stars, are a rare occurrence and difficult to observe since they can only be seen in far away galaxies.

By studying the exploded stars, several of which were found in our galaxy, scientists say they are offered a glimpse at the immediate aftermath of a supernova.

Researchers hope that there could be at least 20 more stars like the one's already identified within our own galaxy which could provide further observational data.