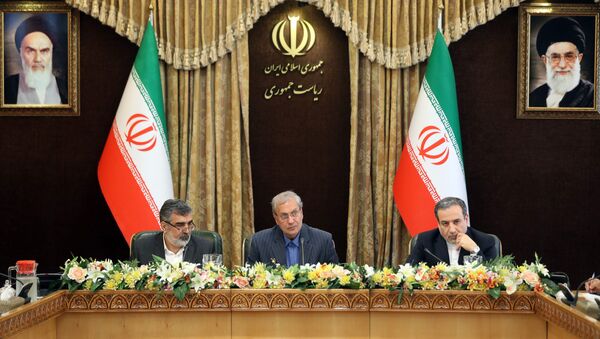 © AFP 2021 / HAMED MALEKPOUR
Subscribe
VIENNA (Sputnik) - Russia understands the reason behind steps taken by Iran with regard to the Joint Comprehensive Plan of Action (JCPOA) but urges Tehran to refrain from actions that could complicate the situation with the nuclear accord, Russia's Permanent Representative to Int'l Organizations in Vienna Mikhail Ulyanov told Sputnik Sunday.

"We understand the steps taken [by Iran], the reasons that pushed the Iranians to take them. We call on Iran to refrain from further actions that could complicate the situation with the nuclear deal even more," Ulyanov said.

According to Ulyanov, Iran's decision to increase uranium enrichment levels was not unexpected as Tehran is acting in a transparent manner.

It will be possible to determine by how much Iran had increased its uranium enrichment limit in a few days, he added, stressing that a report by the International Atomic Energy Agency on Iran's uranium enrichment levels may be presented at a special session of the agency’s governing board on July 10.

"In any case, there is space to continue diplomatic efforts, they will be continued," Ulyanov pointed out.

Iranian authorities announced earlier in the day that the country's enrichment of uranium would surpass 3.6% "in a few hours", which is above the limit set under the 2015 nuclear deal. Tehran has also vowed to reduce its commitments to the nuclear deal every 60 days if the issue is not resolved.

The announcement was made nearly a week after the country's Foreign Minister Javad Zarif said that Tehran would enrich its uranium beyond the 3.67 per cent level, outlined in the 2015 nuclear deal, and it will maintain enrichment at a level that it considers necessary.

On 8 May, Iran announced that it was partially discontinuing its obligations under the JCPOA and urged nuclear deal signatories — China, the European Union, France, Germany, Russia and the United Kingdom to shield Tehran from Washington's sanctions.

Iran's move comes a year after US President Donald Trump unilaterally left the 2015 nuclear deal, reimposed sanctions against Tehran and has been imposing more restrictive measures.