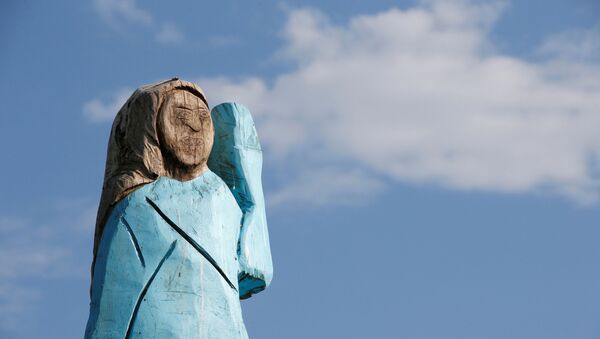 A wooden statue of the first lady of the US was unveiled near FLOTUS’ Slovenian hometown of Sevnica on Friday, becoming the first monument dedicated to Mrs. Melania Trump.

A sculpture of US President Donald Trump’s wife appeared to be a masterpiece created under the guidance of American artist Brad Downey, who reportedly hired local handyman Ales Zupevc to immortalize the latter’s world-renowned compatriot.

The statue appeared to be part of a project dedicated to exploring Mrs. Trump's Slovenian roots, according to The Guardian.

According to media reports, locals were not happy to see the newly-unveiled statue, as some called it “a disgrace” or a “a smurfette”, as they could not see in the statue a resemblance to their countrywoman.

Others, however, decided it was a “good idea” to perpetuate the first lady, described as a “Slovenian hero,” The Guardian reported.

The statue, dubbed in media as a “scarecrow” purportedly due to its location, did not scare netizens, who took the opportunity to share their feelings and make jokes about the wooden figure of FLOTUS.