Iranian President Slams US Sanctions Against Tehran as 'Act of Terrorism' 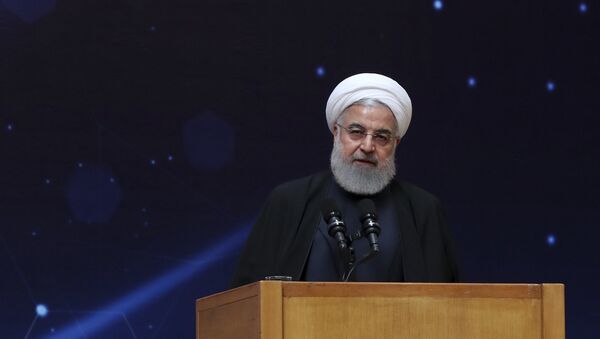 MOSCOW (Sputnik) - Iranian President Hassan Rouhani, who held a phone conversation with his French counterpart, Emmanuel Macron, on Saturday, called the sanctions imposed on Tehran by the United States an "act of terrorism" and warned that should the "economic war" continue, it will affect the world, presidential press services noted.

"He [Rouhani] also described US sanctions against the Iranian nation an act of terrorism and a fully-fledged economic war", the press service said in a statement published on the president's official website late on Saturday.

The Iranian leader told Macron that if economic pressure on the part of the United States persisted, it would have consequences for the region and the whole world.

"Continuation of this economic war can lead to other threats in the region and the world", Rouhani said, quoted in the statement.

During the phone conversation, the president also urged the European Union to do more to preserve the Iran nuclear deal, from which the United States withdrew over a year ago.

"Rouhani said that despite US sanctions, Iran has attempted to save the Joint Comprehensive Plan of Action (JCPOA) during the past 14 months with strategic patience", the press service said.

US President Donald Trump announced in May 2018 that the United States would withdraw from the 2015 JCPOA over Iran's alleged violations of the agreement. Soon after leaving the JCPOA, the United States reinstated economic sanctions against Iran, which had been lifted under the nuclear deal.

In May, Iran announced that the country partly suspended its obligations under the nuclear deal, giving the other JCPOA signatories 60 days — until 7 July — to save the accord by finding a way to protect Iran from the US sanctions pressure.

Earlier in the week, Iranian Foreign Minister Mohammad Javad Zarif confirmed that the country had surpassed its 300-kilogram (660-pound) low-enriched uranium stockpile limit, formerly agreed upon under the nuclear deal.

Iran has also warned that the country would start enriching uranium above the 3.67 percent threshold provided for by the JCPOA, starting from 7 July, if Tehran's conditions were not met.

Macron’s conversation with Rouhani lasted for over an hour. The French president said that in coming days he would consult with Iranian authorities and other signatories to the 2015 pact to achieve "necessary de-escalation in tensions", and vowed to "explore conditions for restarting the dialogue with all parties by 15 July".