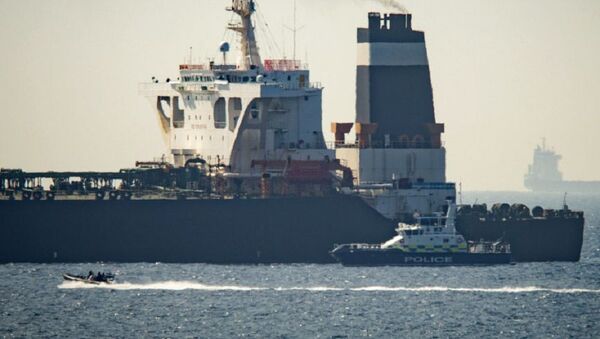 Tehran has voiced its strong objection to the seizure of its vessel off the coast of Gibraltar and accused the UK, which controls the territory, of “piracy”. The vessel is now being held at a Gibraltar port.

Gibraltar’s Supreme Court has extended the detention of an Iranian supertanker, which was impounded this week on suspicion of transporting crude oil to Syria, in violation of the EU- and US-imposed oil embargo.

“The Supreme Court has issued today’s order on the basis that there are reasonable grounds to consider that the detention of the Grace 1 is required for the purposes of compliance with the European Union (EU) Regulation 36/2012 on sanctions on Syria,” Gibraltar’s government said on Friday.

Head of the territory, Fabian Picardo, said on Thursday that the Iranian Grace 1 oil tanker had been seized off Gibraltar by UK Royal Marines. He said the vessel was believed to be en route to a refinery in Syria, which was allegedly owned by an entity subject to EU sanctions against Syria.

The crew, which included citizens of Ukraine, Pakistan, and India, is being held for questioning.

Spain said the 300,000-ton tanker was intercepted in its territorial waters by the UK at the request of the United States.

Madrid is also going to lodge a formal complaint to London about what it sees as an incursion into its waters.

Both the UK and the US gave exuberant praise to the seizure.

Iran has protested the detention of its vessel and summoned its UK ambassador to complain about the matter. The Iranian Foreign Ministry called it "a form of piracy" and reportedly provided the envoy with documents proving that Grace 1 was headed to a permitted destination.

The UK Foreign Office refuted claims of piracy as "nonsense".

Mohsen Rezai, a former leader of the elite Revolutionary Guards Corps and secretary of Iran's Expediency Council that advises Supreme Leader Ayatollah Khomeini, said on Friday that if Grace 1 isn’t released, it is the authorities' duty to seize a British oil tanker in response.

Moscow has also condemned Britain’s actions, saying that they contradict the EU’s commitment to preserving the ailing Iran nuclear deal and are meant to further aggravate the situation around Syria and Iran.