'Germany is Not a Banana Republic!': Ex-Chancellor Slams Trump's Treatment of Europe Like 'Vassals' 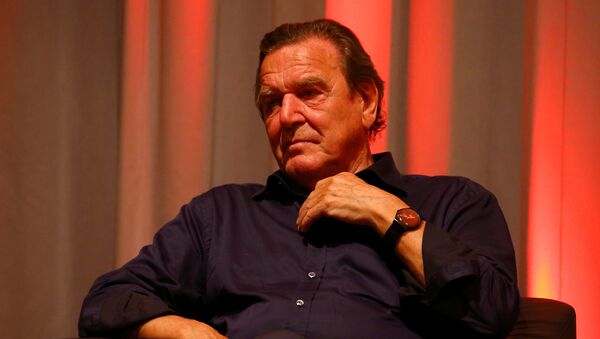 Ilya Tsukanov
All materialsWrite to the author
Gerhard Schroeder, who served as Germany's chancellor between 1998 and 2005, has emerged as an outspoken critic of the Trump administration and its efforts to pressure Germany, saying sovereign countries have the right to determine for themselves whom they do business with and what kind of foreign policy they pursue.

Gerhard Schroeder has come out with new criticism of President Trump's foreign and economic policies, accusing Washington of working to "destroy" the global economic order and of looking at its partners as vassal states rather than allies.

"Under the banner of freedom and market economics, [President Trump] is deliberately destroying the rule-based global economic system," Schroeder said, speaking to Handelsblatt in an interview published Saturday.

Asked if this had to do with Trump's 'America First' economic doctrine, the former chancellor clarified that it's not about protectionism. "Everyone does that, even in Europe. The danger of Trump is that he tries to dictate to friends and allies what they have to do, and what they can do politically and economically. Speaking frankly, this means that he does not want partners, but vassals," he said.

Schroeder also expressed his concern over recent actions by Trump-appointed US Ambassador to Germany Richard Grenell, accusing him of meddling in Germany's affairs.

"What is the American ambassador doing publicly criticising Germany's defence budget, or attacking our automotive industry? Here I would like to have heard a statement from the German government on one or two occasions about how this is none of his business. We are not a banana republic here!" Schroeder said, commenting on the recent Volkswagen 'dieselgate' scandal and the US envoy's reaction to it.

Europe Must Unite or Be Squeezed Between Washington and Beijing

According to Schroeder, a realignment of power is underway in the world. "On one hand there is the still strong US, and on the other a powerful, Asia dominated by China. Who will be able to stand between them - not Germany, not France, but only a united Europe," he said.

"This is what forces us to hold this community together. If we cannot do that, we will become third-rate [countries] between the two above-mentioned poles," Schroeder said, adding that the UK's decision to leave was a "big mistake" which has "weakened Europe permanently."

"Now is the time to move on to a federal Europe, although I know how difficult that is. Unfortunately, nobody is ready for it right now," Schroeder, who played an instrumental role in expanding the EU project in the late 1990s and early 2000s, stressed. "The euro area must get far greater coordination of economic, financial and social policy too. The nucleus is the euro area. Designing and expanding it is the task for the next generation on the way to a United States of Europe."

Schroeder warned against exaggerating the supposed threat posed by China. "It used to be considered common sense that China is so important to the world economy that it must take on more responsibility. Now, Beijing is doing just that, and the reaction is that many are warning about a 'Yellow Peril," he said.

Commenting on the assessment that China engages in 'neo-mercantilist' policy with its Silk Road initiative, Schroeder said the US dollar system does the same thing.

During his chancellorship, Schroeder devoted considerable attention to improving German and European relations and economic ties with Russia. A key proponent of the Nord Stream gas pipeline project, he is now chairman of Nord Stream AG, the consortium operating the pipeline. Earlier this year, he told German media that Europe needs Russia's economic potential, its markets and its natural resources in order to withstand competition from economic superpowers China and the US.