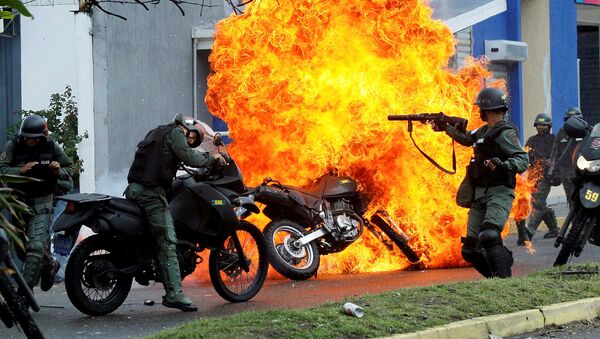 UN human rights chief Michelle Bachelet presented a scathing attack on the Venezuelan government to the Human Rights Council on Friday, but critics say she ignored the causes of the country’s crisis as well as the victims of opposition violence in order to present a one-sided view that faults only Venezuelan President Nicolas Maduro.

Bachelet’s report, which she presented to the UN Human Rights Council in Geneva on Friday but about which she made preliminary remarks earlier in the week, was based on a range of data collected by the office of the High Commissioner (OHCHR) and on interviews with 558 “victims and witnesses of human rights violations and the deteriorating economic situation” in Venezuela as well as numerous other countries, according to a Thursday news release by the office.

The report describes a situation in which food and medicine are becoming harder to come by, violence is on the rise and human rights are under attack. However, it only presents one side of this crisis, casting it as a problem created - and to be solved - exclusively by the Maduro administration.

Bachelet met last month separately with both Maduro and Juan Guaido, the president of the National Assembly who declared himself the country’s interim president in January and has staged three attempted coups d’etat against Maduro with US backing. At that meeting, Bachelet described much of her findings to Maduro, who at the time pledged to “take her suggestions, recommendations and proposals very seriously.”

At that time, she described as “heart-rending” the tales of violence, including murder, by victims and their families of both state-sanctioned violence and violence carried out by anti-government actors. Although she noted a “deteriorated” humanitarian and economic situation in the country, Bachlet, a former president of Chile, noted that US sanctions were one of the factors  “exasperating and aggravating the pre-existing economic crisis.”

The news caused advocate groups such as the Committee for Victims of the Guarimbas to breathe a sigh of relief.

“After many years of struggle finally we are recognised by the system of human rights which has always opted to protect those responsible for the murder of our family members,” the committee wrote on Twitter at the time. The guarimbas were a series of violent riots in 2014 and 2017 in which opposition forces set up barricades and booby traps, including razor wire strung across roadways to ensnare bike-riders, and targeted perceived Chavistas with sometimes deadly violence. One infamous episode in June 2017 saw a 22-year-old black man named Orlando Figuera surrounded by an angry opposition mob, doused in petroleum and burned alive. He was one of at least 60 people murdered by guarimberos in that riot.

However, Bachelet’s July 5 report paints a different picture - one that far more aligns with the US-presented narrative of events in Venezuela and ignores the causes and context in which the crisis is taking place.

“While the economy of Venezuela was in crisis well before any sectoral sanctions were imposed, the report says that the latest economic sanctions linked to oil exports are further exacerbating the effects of the crisis,” the press release states. With a wave of the hand, the entire US sanctions regime is dismissed - a program the US government has admitted is aimed at causing regime change.

.@mbachelet frames the notion that sanctions have hurt the government's ability to import food as the gov "assign[ing] blame". She also claims the current economic crisis predates sanctions and therefore is the fault of the Venezuelan government. pic.twitter.com/6CllMzmQYf

​Bachelet neglects to mention the colossal impact of US sanctions in the last two years alone, which include not only the excess deaths of 40,000 Venezuelans but also the chronic shortage of medicine for treating conditions like HIV, diabetes and kidney disease, according to an April report by the Center for Economic and Policy Research.

The US state has had the Local Provision and Production Committees (CLAPs) in its targeting reticle almost since their 2016 introduction - itself a response to the growing economic crisis. Sputnik reported in May that the hawkish Center for Strategic and International Studies (CSIS) think tank laid out a plan for undermining the Veneuzelan government by targeting CLAPs and the OHCHR report repeats the same shibboleths as CSIS, such as that the CLAPs monitor the political activities of citizens and use the monthly food boxes to buy votes.

Hawkish think tanks like @CSIS have promoted targeting CLAP for years. US argues CLAP "buys votes" & support and justifies destroying what it admits is a lifeline for millions of people - all for the purpose of putting a gov in power the US likes. https://t.co/bRriQKuWL2 pic.twitter.com/pe2jKt2ecX

​Bachelet also describes 5,287 “alleged extrajudicial killings by security forces, particularly the special forces (FAES)” in 2018, which the report notes includes what Caracas describes as caused by “resistance to authority.” It notes another 1,569 killed between January 1 and May 19 of this year. However, what the OHCHR report does not discuss are deaths at the hands of the opposition or the violence organized and perpetrated by them. It does not even mention the word “guarimba.”

Appalled that @mbachelet chose not to mention the impact of right-wing terrorism on Venezuelan society. The word "guarimba" does not appear once in her report, nor does the name Orlando Figuera, 1 of many ppl murdered by the opposition for being chavista. https://t.co/5TbEB32Vp8

​Bachelet’s report doesn’t mention the violent opposition riots, nor does it acknowledge the three attempted coups d’etat by Guaido since January, the attacks on pro-government Venezuelans by opposition forces or indeed any of the violence carried out by the opposition in its attempt to forcibly overthrow the Maduro government. Readers must gratify themselves with this passive-aggressively neutral line that refers to “perceived” threats.

“The authorities have particularly targeted certain individuals and groups, including members of the political opposition and those perceived as threats to the government due to their capacity to articulate critical positions and to mobilize others,” the report states.

​“We have been let down,” the Committee for Victims of the Guarimbas tweeted on Thursday, noting that after meeting with them and hearing their testimonies, Bachelet “pledged to incorporate them into her report.”

The committee said the report “invisibilizes - once again - the victims and protects those responsible for the violence that has done so much damage to the country.”

The reversal is made all the more remarkable since it also contradicts a previous report by the UN OHCHR made just two months prior. On May 6, Idriss Jazairy, the UN special rapporteur concerned with the negative impact of sanctions, stood in the same chamber as Bachelet did on Friday and blasted the US’ sanctions as central to the crisis in Venezuela and its program of regime change.

“Regime change through economic measures likely to lead to the denial of basic human rights and indeed possibly to starvation has never been an accepted practice of international relations,” Jazairy said at the time. “Real concerns and serious political differences between governments must never be resolved by precipitating economic and humanitarian disasters, making ordinary people pawns and hostages thereof.”

“The resort by a major power of its dominant position in the international financial arena against its own allies to cause economic hardship to the economy of sovereign States is contrary to international law, and inevitably undermines the human rights of their citizens,” the special rapporteur said. “It is hard to figure out how measures which have the effect of destroying Venezuela’s economy, and preventing Venezuelans from sending home money, can be aimed at ‘helping the Venezuelan people’, as claimed by the US Treasury.”