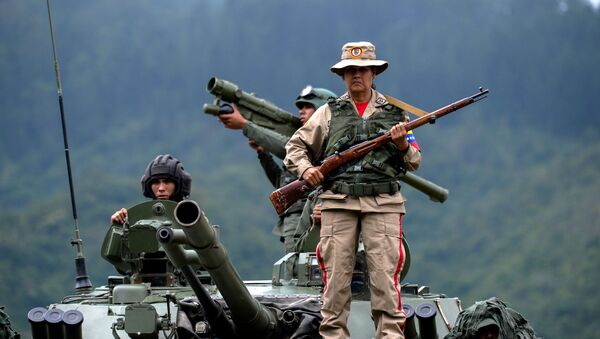 © AFP 2021 / FEDERICO PARRA
Subscribe
The situation in Venezuela has been tense since January following the eruption of anti-government protests, fueled by opposition leader Juan Guaido’s proclamation as the nation's interim president.

Russian Deputy Foreign Minister Sergey Ryabkov has told journalists on Friday that Moscow is determined to counter any internal or external attempts to destabilise the situation in Venezuela. The official stressed that the United States keeps on devising ways to further destabilise the situation in the country. However, he noted that their efforts fail due to the public support for the legitimately elected authorities.

Ryabkov also underlined that Moscow will continue to boost the potential of the Venezuelan Armed Forces.

"We will certainly take measures under the existing agreements, which will help strengthen the potential of that country's Armed Forces", Ryabkov told reporters.

Ryabkov underlined that the focus will be placed on the equipment sent to Venezuela, once again dismissing speculations that Russia has military personnel deployed in the Latin American country.

Venezuela has been plagued by political instability since January when US-backed opposition leader and head of the National Assembly Juan Guaido proclaimed himself interim president in a bid to replace incumbent president Nicolas Maduro.

The United States and its allies, including a number of EU nations, immediately recognised Guaido, while Russia, China, Cuba, Bolivia, Turkey, among others, voiced their support for Maduro as the country’s only legitimate president.

Russia has underlined several times that the presence of Russian military experts in Venezuela is completely legitimate. The specialists are in the country to train technicians and work on repair and maintenance of weapons systems, previously sent to Venezuela under bilateral defence industry cooperation agreements.

000000
Popular comments
For the first time, after the collapse of the USSR, Russia has issued a very strong definitive assertive statement expressing her unquavering resoluted intention to take on the rogue globally, beginning with the Venezuelan theatre. 👏👏👏 This is the true beginning of the multipolar world, and the true beginning of the end of the rogue's global hegemony. With this declaration of intent comes an unvocalised Russian decision- to amend Russian constitution to enable Putin stand in election for further terms. I conjecture this because, without Putin at the helm of affairs, the Russian global resolution cannot withstand the assaults by the cartel of the rogues.

PranSa
5 July 2019, 16:11 GMT8
000000
"external attempts to destabilise the situation in Venezuela" meaning the US terrorist, its time to let them know they don't own the world.