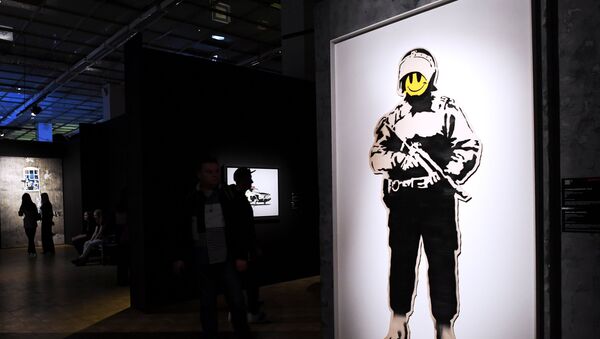 Banksy has kept an extremely low public profile throughout his entire career, but now there is speculation that he might have shown his face – or at least part of it – to journalists 16 years ago.

A long-forgotten video interview with a graffiti artist purported to be Banksy has been discovered in the archives of ITV network.

The report was filmed back in July 2003, ahead of the now-world-famous street artist’s first major exhibition, Turf War, which featured graffiti-coated live animals.

The footage shows the interviewee thought to be Banksy, whose face is partially hidden by a baseball cap and a pulled-up T-shirt. His eyes, eyebrows, and forehead are still visible.

“I’m disguised because you can’t really be a graffiti writer and then go public,” the man is heard saying, “The two things don’t quite go together.”

He also says: “It’s hard to make an entertaining picture at the best of times but at least if you have something that wanders around and licks its nose and urinates in front of you it’s going to make the picture a bit more interesting.”

The artist was filmed working on a piece in which a baby is putting building blocks together creating the slogan 'Kill People', and stencilling a silhouette of an insect onto a bigger picture – two works of art that have been attributed to Banksy.

When asked about spraying “Designated Riot Area” across the steps of Nelson’s Column just days prior to the exhibition, the man, whom the interviewer referred to as Banksy, says: “I thought that was quite funny.”

The interviewer, ITV News reporter Haig Gordon, asks: “You don’t mind if I pass your details on to the police?” The man jokes: “No. What details have you got?”

The footage was shown on ITV News London at the time but then was forgotten, only to be unearthed by ITV’s Robert Murphy 16 years later.

Murphy recently filmed Banksy’s subversive painting called Devolved Parliament, which was displayed at Bristol Museum, and came across the interview when he was looking through the company’s vaults.

He then reached out to Haig Gordon, who has retired since then. Gordon recalled: “I saw his face. The only problem is that I can’t remember what his face looked like.”

He argued that he gave Banksy’s career a “major boost” – not by having the interview itself but teaching him that he should stay elusive and never have another one. Since then, Banksy has been keeping his identity a secret, although some believe that he did appear on camera on some occasions.