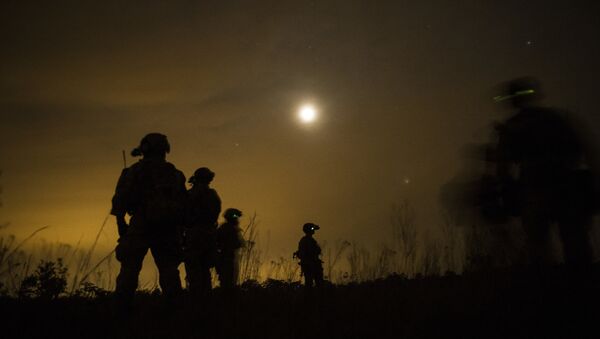 In a bid to enhance both soldier training and battlefield performance, Microsoft is developing a set of visual augmentation glasses that provide the wearer with real-time information about comrades’ locations, battlefield markers, thermal and night vision, and even show the wearer simulated enemies.

The Army gave Microsoft a $480 million contract in November 2018 to develop the Integrated Visual Augmentation System (IVAS), which was tested for the first time in April 2019. The Army is presently testing the system out at Fort Pickett, Virginia, as a way to enhance training drills, but the service hopes to eventually hand the glasses out to soldiers on the battlefield, where they’ll provide an integrated web of information feeds both to and from their wearers, giving them a decisive edge on the battlefield.

#US soldiers train with a Integrated Visual Augmentation System 'HoloLens 2' from Microsoft. pic.twitter.com/t8lmvrTO89

​The IVAS prototypes look like just another kind of virtual reality glasses, but it’s actually augmented reality - the glasses function like a heads-up display for dismounted infantry. However, they don’t just provide readouts: they can project objects for the wearer to “see,” including everything from location beacons to simulated enemy fighters.

All that feedback helps with training, too: soldiers can review their actions in a playback, helping them to hone their battlefield skills in what effectively turns IVAS into a sort of “flight simulator” for infantry.

All that’s missing is a health bar.

Military Times reported a description of an IVAS test by Ryan McCarthy, who is now the acting Secretary of the Army following Mark Esper’s nomination for Defense Secretary, and incoming Army Chief of Staff Gen. James McConville.

“He and I literally put them on, and we went through a shoot house together," McCarthy said, noting they actually went through “empty rooms, because we had the synthetic feed."

"I literally came in a room ... and they looked like Taliban targets and ISIS guys with black turbans," McCarthy told Military Times. "They had one where they had a guy holding a civilian. It looked like a very good video game."

"It was like a pair of glasses,” he said, “and literally when you are walking through a room and seeing the target, I had depth perception to my left and right, so I could see down the hallway."

“No other piece of equipment has had this kind of impact since the introduction of night vision,” McCarthy, a former US Army Ranger, told the Army Times in April. “This takes night vision to the PhD level.”

The IVAS glasses are in constant wireless communication with the rest of the squad via either radio or internet. Not only does the system show the squad’s locations - which can prevent friendly fire - it can also let users drop digital symbols on their shared map, which might indicate the location of anything from a fortified enemy location to a good cover spot, a rallying location, or whatever they need it to mean. That map also contains a compass overlay, helping soldiers to be constantly aware of their orientation.

Army Times noted the night vision and thermal vision are much more advanced than the classic “green glow,” making the best use of the Pentagon’s newest “White Phosphor” image intensifier technology to show objects in the dark as true-to-life as possible.

In other words, IVAS combines a half-dozen different devices and resources into a single, coherent system.

Microsoft delivered 50 headsets to the Army in March, although development of IVAS will continue through at least November, with the goal of putting IVAS on the battlefield by the following November.