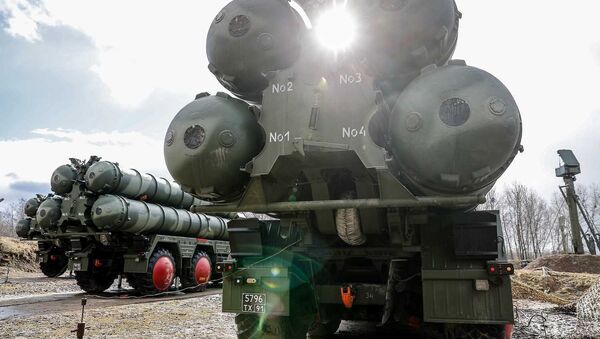 © Photo : Department of information support of the Baltic region
/
Go to the mediabank
Subscribe

Turkish Foreign Minister Mevlut Cavusoglu earlier this day confirmed that the S-400 deal was done and the US-Turkish spat over the acquisition of the air defence systems started to die down.

Deliveries of Russian state-of-the-art S-400 air defence systems to Turkey are expected to begin in the next few days, according to President Erdogan's spokesperson Ibrahim Kalin as quoted by the Anadolu news agency.

"The S-400 contract is a done deal, and we are rapidly approaching the last stage. Very soon, in the coming days, these systems will arrive in Turkey and will be actively used", Kalin told reporters in Ankara.

According to Kalin, the Turkish Defence Ministry is examining options for the placement of the Russian systems. Previously, Turkish authorities stated that the S-400s could be deployed in Qatar or Azerbaijan to avoid further tensions in US-Turkish relations.

The spokesperson once again reiterated Ankara's official stance that the systems would not present any threat to NATO security.

Last week, during the G20 summit in Osaka, President Erdogan also confirmed that the delivery of the missile systems would begin "within ten days".

The head of the Turkish government also quoted President Trump as saying that Ankara would not be subject to sanctions over the S-400 deal.

Moscow and Ankara signed the agreement on the shipment of the air defence systems in 2017. The move immediately drew ire from Washington, which claimed the systems were incompatible with NATO standards.

The US also threatened Ankara with sanctions, warning that the US will stop Turkish forces from flying and receiving its F-35 jets.

Turkey, in turn, repeatedly stressed that the purchase of military equipment is a sovereign right and ruled out the possibility of abandoning plans to acquire the S-400 systems.