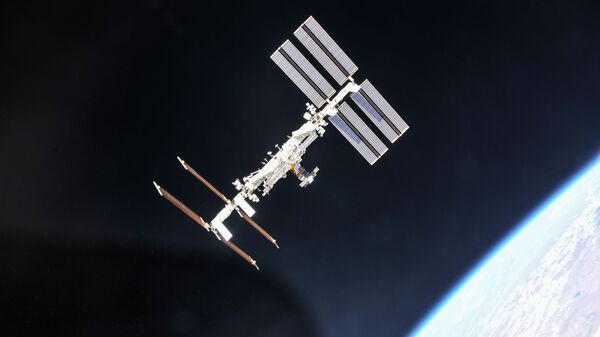 © Photo : NASA/Roscosmos
Subscribe
The two US astronauts posted a video on twitter, reaching out to those compatriots on the little blue ball 250 miles below who are also celebrating US Independence Day.

Two US astronauts congratulated their compatriots on Earth on the 4th of July from aboard the International Space Station (ISS) on Thursday. The two NASA astronauts, Christina Koch and Nick Hague, posted video on the ISS Twitter account.

“As we orbit our planet high above you, we want to take a moment and wish all Americans at home, and around the world, a very happy Fourth of July,” Koch said in the video. “Through history, our flag has traveled with humans and robots to the farthest reaches of the solar system as American ingenuity has pushed the boundaries of what is possible through grit, determination and imagination.”

It's a star spangled space station! Wherever you may be celebrating, @Astro_Christina and @AstroHague send Independence Day greetings on behalf of the crew aboard the orbiting laboratory, 250 miles above the planet we call home. Happy #4thOfJuly! pic.twitter.com/d12rLUyatO

​She added that “on this Independence Day, we’re now on the verge of American astronauts, engineers, scientists and commercial companies taking the next giant leap for humankind.”

Commander Hague praised the current state of NASA activity, recently ramped up by initiatives of the administration of US President Donald Trump.

“It’s an incredibly exciting time for spaceflight in America, from the completion of the first flight in the Commercial Crew Program to the unveiling of the bold plan to send the first woman and the next man to the Moon by 2024, this is a unique moment in history in which we can cast our eyes to the sky and heavens and be proud to be an American,” he said.

Trump’s 2017 Space Policy Directive 1 launched NASA’s Artemis program, seeking to take both a US man and a US woman to the moon by 2024. The presidential order also tasked NASA with delivering the first humans on Mars by 2033.

The upcoming 20 July will mark the 50th anniversary of the Apollo 11 Moon landing, the first space flight to land members of humanity - in this case 3 US astronauts - to the Moon. To this day, only 12 humans have walked on the Moon.

Hague, Koch and Russian cosmonaut Aleksei Ovchinin are currently the only human space travelers aboard the ISS. On 20 July, 2019, they will be joined by Russian Aleksandr Skvortsov, American Andrew R. Morgan and Italian Luca Parmitano. Koch is on her way to set a world record for the longest female space mission in history, with an expected total of 328 days in space.