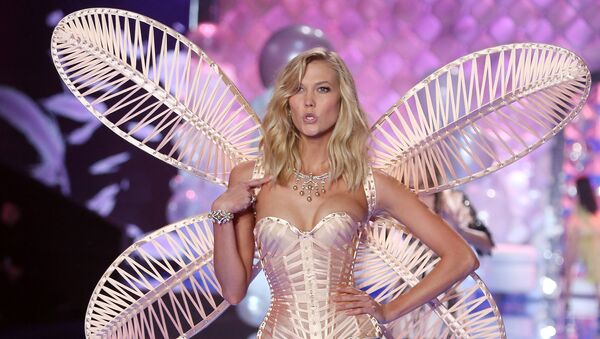 © AP Photo / Joel Ryan/Invision
Subscribe
Karlie Kloss used to be a Victoria’s Secret Angel and has featured in numerous fashion shows; she's also starting an educational company, Kode With Klossy. She created a media frenzy when she announced she was marrying the brother of the president's son-in-law, Joshua Kushner, in 2018.

Former Victoria’s Secret model Karlie Kloss, who is married to Josh Kushner, has revealed what it’s been like to be directly tied to the Trump family in an interview for the British edition of Vogue.

To me this cover is the culmination of so many forces in my life. A true dream team: @BritishVogue, @Edward_Enninful, #StevenMeisel, @patmcgrathreal & @GuidoPalau, all powerful mentors who’ve guided me since my careers inception 💚💚 I am so grateful. Thank you 🙏 pic.twitter.com/REpKRK7RvX

The brother of ​Karlie Kloss’s spouse Josh Kushner is Jared Kushner, the spouse of US President Donald Trump’s daughter, Ivanka.
Kloss confessed that it has not been easy for her, considering that her husband’s brother is senior adviser to the president.
“It’s been hard,” she said, adding that she is often questioned regarding her own political views and whether she agrees with the actions and policies of the US President.
She continued:

“But I choose to focus on the values that I share with my husband, and those are the same liberal values that I was raised with and that have guided me throughout my life.”

Although Kloss has typically shied away from talking about her own political views, according to The Hollywood Reporter the model had previously implied she voted for Hillary Clinton in the 2016 election and posted photos from the March for Our Lives protest against gun violence in March 2018.

In the interview, Kloss opened up on why she chose to leave Victoria’s Secret.

"The reason I decided to stop working with Victoria’s Secret was I didn’t feel it was an image that was truly reflective of who I am and the kind of message I want to send to young women around the world about what it means to be beautiful," she explained.

Although quitting the elite lingerie brand show in 2015, when embarking upon her NYU studies, Kloss was reunited with Victoria’s Secret in 2017, calling it “so relevant in the world we live in today” in a 2018 interview with The Telegraph.

At the time, the model said she believed there was something powerful about a woman who was able to embrace her sexuality and take charge, adding:

“A show like this celebrates that and allows all of us to be the best versions of ourselves.”

Model and start-upper Karlie Kloss was only 19 when she started dating the brother of the president's son-in-law, Joshua Kushner - a long time before Donald Trump became installed in the White House.

When the two announced their engagement after having kept their relationship mostly under the radar, they triggered a social media storm.

Joshua, who is an entrepreneur and founder of a number of firms, is close to Jared Kushner and Ivanka Trump, whom he calls sister, according to Forbes.