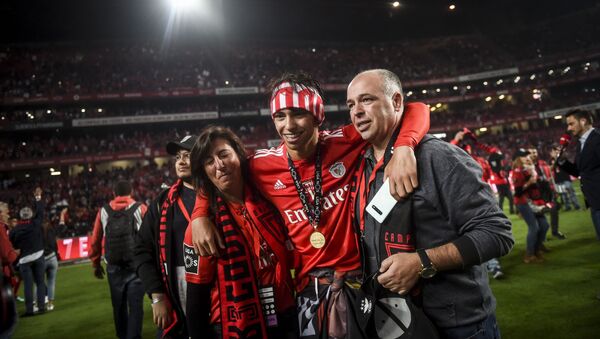 © AFP 2021 / PATRICIA DE MELO MOREIRA
Subscribe
European football’s summer transfer market has sparked into life after a quiet May and June. Manchester United are reportedly lining up a £70 million bid for England defender Harry Maguire and Atletico Madrid have just signed a teenager for an eye-watering sum.

The fee makes the Portuguese teenager the third most expensive signing in football history - behind Neymar’s £198 million move from Barcelona to Paris St Germain and Kylian Mbappe’s £116 million transfer from Monaco to PSG.

Atletico tweeted a video of the player in the Prado gallery in Madrid contemplating paintings by old masters, with the phrase, "Pure Talent."

​Felix only made his debut for Benfica in August but has scored 20 goals in 43 games and helped the club win the Portuguese league title.

He also made his debut for Portugal earlier this month, starting alongside 34-year-old Cristiano Ronaldo against Switzerland.

​Felix, who has signed a contract which will keep him at Atletico until 2026, is expected to replace French international Antoine Griezmann, who is being lined up to join Barcelona for 120 million euros (£107.6 million).

Atletico coach Diego Simeone said of Felix: "He's a young player. Historically, Atletico Madrid is a club that buys young players in order to develop and improve them... Like Griezmann, who when he arrived was not what he is today."

Griezmann, 28, has scored 133 goals in five seasons at the club and Manchester United were among his many admirers.

Wan-Bissaka, a full back, cost £50 million from Crystal Palace and United are keen to further shore up their shaky defence by buying England international Harry Maguire.

The Red Devils had bid £70 million and if Leicester sell him they are likely to splash out on Brighton defender Lewis Dunk as a replacement.

Across town, Manchester City have reportedly agreed a fee of £62.8 million with Atletico Madrid for Spanish midfielder Rodri.