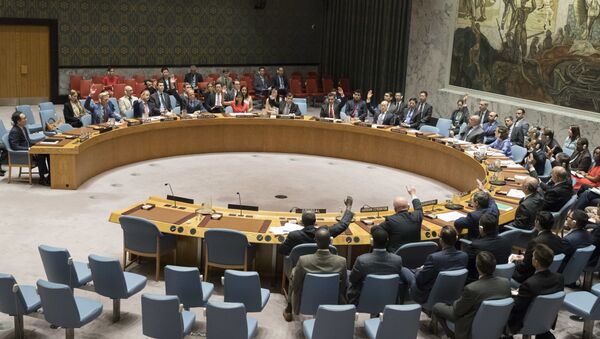 © AP Photo / Mary Altaffer
Subscribe
UNITED NATIONS (Sputnik) - The UNSC could not agree on the wording for a statement condemning an airstrike on a migrant detention centre in Tripoli, Libya, in which at least 44 have died, current UN Security Council president Gustavo Meza-Cuadro told reporters, following closed consultations on the situation.

"We will condemn that, we have not agreed on an element for the press, maybe, we will have a press statement, but we are still discussing it", Meza Cuadro said on Wednesday.

Meza Cuadro said that "several" delegations agreed on a statement issued by UN Secretary-General Antonio Guterres earlier on Wednesday in which he condemned the attack and called for an independent investigation and accountability for those who carried out airstrikes on civilian facilities.

The president added that the UNSC might reconvene to address Libya before the next scheduled meeting on 29 July.

"There is an additional meeting on Libya on our program. If things evolve in a negative way, we will have another meeting before that", Meza Cuadro said.

The UN Stabilization Mission in Libya (UNSMIL) said earlier in the day that at least 44 people were killed and 130 severely injured as a result of the airstrike, reportedly carried out by forces loyal to Libyan National Army (LNA) chief Khalifa Haftar, on the Tajoura migrant detention centre.

On 4 April, Haftar ordered his forces to begin an offensive on Tripoli. Most recently, the LNA Air Force has bombarded the positions of various armed groups in different districts of Tripoli.

Since the overthrow and killing of Libya's long-time leader Muammar Gaddafi in 2011, the country has been gripped by conflict.

Libya is now divided between two governments, as the country’s eastern part is controlled by the LNA, and the western part governed by the UN-backed Government of National Accord (GNA).