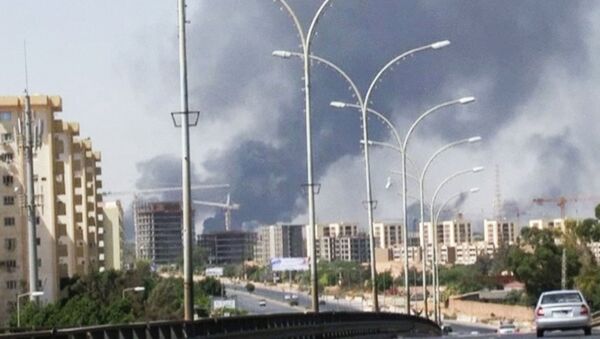 © AP Photo / Uncredited
Subscribe
MOSCOW (Sputnik) - The UN Refugee Agency (UNHCR) in Libya expressed on Wednesday concern over the deadly airstrike on a detention center for illegal migrants near the Libyan capital of Tripoli.

"UNHCR is extremely concerned about news of airstrikes targeting Tajoura detention centre East of Tripoli, and accounts of refugees and migrants deceased. Civilians should never be a target", UNHCR Libya wrote on its Twitter page.

Earlier in the day, a representative of Tripoli’s medical service, Malek Merset, confirmed that the airstrike had left at least 40 killed and 80 injured.

Libya is one of the main transit countries for migrants heading from African and Middle Eastern states to Europe. According to the UN figures, the vast majority of migrants who cross the Mediterranean to Europe — about 90 percent — depart from Libya.

Libya has been divided since the overthrow and killing of long-time leader Muammar Gaddafi in 2011. Opposition factions are represented by the internationally recognized Government of National Accord (GNA), headed by Fayez Sarraj in Tripoli, and a parallel administration in the east of the country, backed by the Libyan National Army (LNA).

In April, the LNA, led by Field Marshal Khalifa Haftar, launched an offensive to retake Tripoli from forces loyal to the GNA. Eastern Libyan forces have taken a number of settlements on the way to the capital, including the Tripoli International Airport.