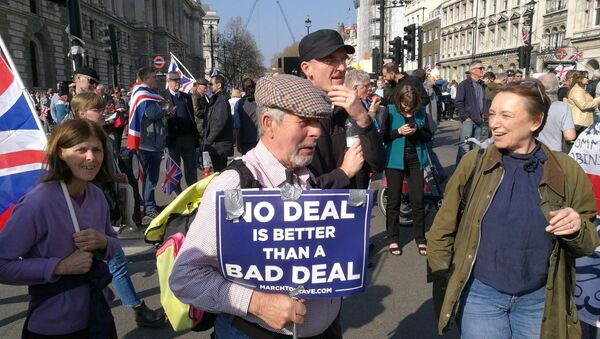 © Sputnik / Demond Cureton
Subscribe
Conservative Party leadership candidates Boris Johnson and Jeremy Hunt have revealed more details of their policies at the latest Tory hustings, with both vying to win over the Tory party's grassroots in the upcoming postal vote. But who will come out on top?

Sputnik spoke with Henry Bolton; leader of the Our Nation Party for more…

Sputnik: Will Boris Johnson become the next British Prime Minister?

Can he, or indeed Jeremy Hunt should he win it, deliver Brexit on the 31st of October? They can, yes, it is possible, it is really down to how bullish they are prepared to be, and again I think Boris Johnson is more likely to deliver in the final analysis than Jeremy Hunt.

The legal situation remains that the default is to leave on the 31st of October with no deal; Parliament could derail that, and indeed should Boris Johnson win the leadership and become Prime Minister, it’s quite possible that the Labour Party will table a vote of no confidence against the government, and that would be  a close vote, and nobody can really predict how the cards would fall, so we’ll have to see, it’s about who’s going to blink first, and I think Boris is unlikely to blink, he’s painted himself into very much a political corner on that one  now.

Sputnik: Could the Labour Party win a general election?

They are no more united; perhaps less united on the issue of Brexit than the Conservative Party.

Sputnik: Would a WTO rules Brexit be as bad as many of the pro-remain factions in parliament believe?

Henry Bolton: The British people voted to leave, and there’s enough frustration already with politics and politicians, and the credibility of not just the Conservative government and party, but the entire democratic system. In order to reinstate some degree of credibility in the system in the UK, we must deliver Brexit, and whatever reasons politicians come up with for not doing it, at the end of the day they held a referendum, they voted to support the outcome of that, and now they backtracking, so this is very damaging to British democracy, and I think they have to deliver it.

The consequences have to be managed as such, but there’s a lot of disinformation out there; there’s a grain of truth in everything, but there’s also a massive amount of falsehood. I was speaking to a senior marketing manager in an international company, a French-owned company, and they are all very worried that their supply chain is going to be interrupted. Their biggest market is actually Russia, then China, then Japan, then India, Brazil, the USA and Canada, and they are exporting from the UK to all of those countries.

There is no technical difference really for them to export to the EU; they can easily adapt, they’ve adapted to the regulations in a whole range of different major economies around the world, and they can do the same with the EU, but there is a lot of scaremongering, and the government has undoubtedly failed to give business any steer on what is likely to happen, so the sooner we bring clarity to all of this, the better, and the only people that can do that, are the government.