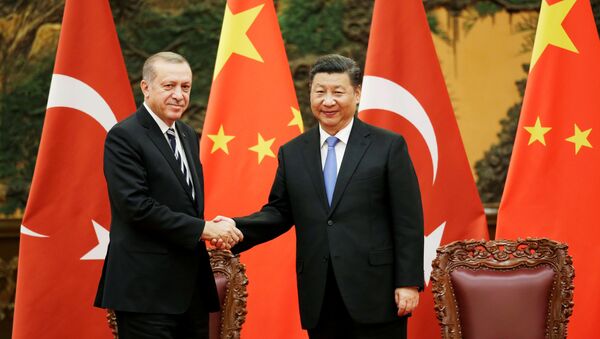 "The two countries need to raise the level of political cooperation, strengthen strategic ties and respect each other’s vested interests and concerns over sovereignty, independence, and territorial integrity", Xi was cited as saying by the Chinese Foreign Ministry.

Xi said he appreciated Erdogan’s opposition to activities on Turkish soil advocating for the break up of China and valued the latter's support for Beijing's fight against terrorism.

The visit comes as both Turkey and China are reportedly at a low point in relations with Washington over Ankara’s missile deal with Moscow and ongoing US-Chinese trade imbalances.

Ties between the two countries soured this year after a Turkish Foreign Ministry spokesman slammed China for mistreating the Muslim majority Uighur population in the autonomous Xinjiang province.

The Turkish official noted that over a million people belonging to the Uighur Turkic-speaking minority had been detained in reeducation camps in what China calls vocational training centers aimed at addressing extremism.

Beijing protested Ankara’s statements, calling them "disgusting." Following a harsh exchange in early March, the Chinese Embassy in Turkey temporarily closed the Consulate General in Izmir. The diplomatic mission, however, stated that the decision was made for - among other reasons - "effectiveness and integration of resources."

Erdogan, however, recently praised progress in his country’s ties with China, both bilaterally and within the Shanghai Cooperation Organization, in which Turkey is a dialogue partner. The Turkish president said the two countries were on the same page, economically. Turkey supports China’s flagship Belt and Road Initiative, which seeks to link the Asian economic powerhouse with other Asian and European nations via infrastructure projects.