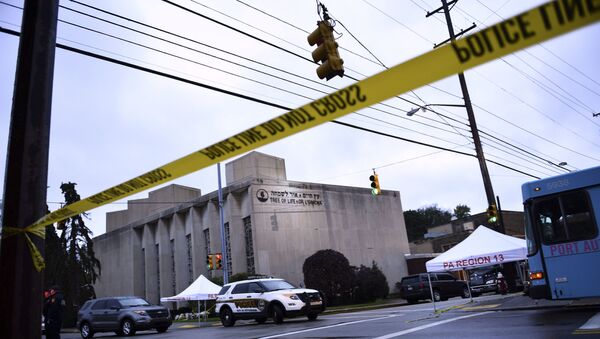 The exercises come in response to a series of deadly shootings in US synagogues, including the massacre at the Tree of Life in Pittsburgh, Pennsylvania that claimed the lives of 11 people in October 2018, and the tragedy at the Chabad Synagogue in Poway, California that killed one person in April.

The Temple Beth Hillel-Beth El synagogue in Wynnewood, Pennsylvania has run active gunman scenarios during services to train congregants how to act in the event of a real mass shooting, The Times of Israel reported.

This kind of training normally involves the "run, hide, fight" action, which implies that members of the congregation should choose one of those options - either running to a safe place, hiding in some sort of shelter or fighting the shooter.

"It was not a high-energy, kind of catching people off-guard kind of thing. We also wanted to let people know, more than anything else, that we're on top of this. We have a procedure. We have people looking out", said Rabbi Neil Cooper.

Some sanctuaries are said to have detailed plans in place should a gunman arrive at their doorstep in addition to a wide range of other security measures adopted following the Pittsburgh carnage, in which 11 people were killed at the Tree of Life Synagogue on 27 October 2018.

These procedures include locking doors, reinforcing windows and hiring armed security. Per The Times of Israel, some congregations have encouraged members to carry guns at services, while others have introduced new restrictions.

"People very rarely rise to the occasion" in the event of a mass shooting, Michael Masters, CEO of the Secure Community Network, an organisation which provides security resources and expertise to Jewish communal institutions in the United States, says. "They fall back to their level of training. Our goal is to give people a plan in their minds so that if an event happens, they have a toolbox they can draw from effectively".

Meanwhile, over 20 synagogues in the New York City area have moved to take self-defence courses from Avi Abraham, an Israeli martial arts experts who teaches Krav Maga, a fighting system designed for the Israel Defence Forces (IDF). Abraham's course, which reportedly costs $1,500 to $2,000, consists of six hour-long classes for congregants where they learn how to fight back against a gunman.

The need for such drills became obvious after a string of deadly shootings in US synagogues: on 27 October 2018, gunman Robert Bowers went on a shooting spree at the Tree of Life Synagogue in Pittsburgh, Pennsylvania, killing 11 congregants and wounding 6 more, while shouting "all Jews must die" throughout the attack. Following a shootout with police, the perpetrator was shot and arrested.

Several months later, on 27 April 2019 - the last day of Passover, 19-year-old John Earnest opened fire at the Chabad Synagogue in Poway, California, killing one person and injuring three others. The shooter, who is said to have been motivated by the Pittsburgh attack, was later detained.