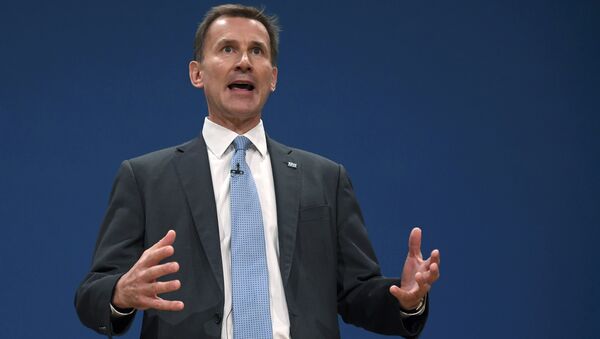 "I can’t envisage any circumstances where we will be part of that because we’ve taken a different view on this nuclear deal and the sanctions that America decided to impose", Hunt told Sky News.

"We want to preserve that deal because we don’t want Iran to have nuclear weapons. But if Iran breaks that deal then we are out of it as well", Hunt said.

The diplomat added he agreed with Washington that the root cause of instability in the Middle East were groups like Hezbollah and Houthi rebels in Yemen that he claimed Iran was allegedly sponsoring.

In May, exactly a year after the United States unilaterally withdrew from the landmark nuclear accord and started unveiling the wide-ranging sanctions against Iran, Tehran informed the remaining parties to the JCPOA — France, Germany, the United Kingdom, China, Russia and the European Union — about its decision to abandon some parts of it and gave Europe 60 days to ensure Iran's interests under the pact. Tehran said it would be ready to take further measures to scrap the accord If this request was not met.

Iran's Atomic Energy Organization said in June Tehran was not going to extend the 60-day deadline and promised to take further actions in reducing its nuclear curtailment obligations "in accordance with the schedule".

Iran has warned it will continue enriching uranium if the United Kingdom and other signatories do not shield it from US sanctions.

The next stage of reducing obligations under the JCPOA could reportedly entail Tehran suspending the modernization of the nuclear reactor in Arak, as required under the nuclear deal, and abandon the restrictions on uranium enrichment levels.

After the Islamic Revolutionary Guard Corps shot down a US spy drone over the Strait of Hormuz tensions flared further. US President Donald Trump said the Pentagon was on the verge of launching an airstrike on Iranian targets.