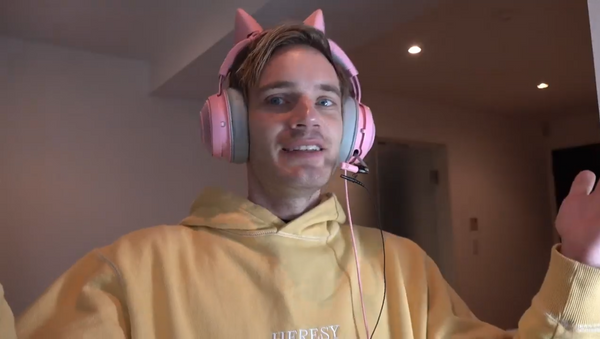 Two months ago, famous beauty blogger and Internet personality James Charles thanked PewDiePie for his support in a bitter row with a fellow YouTuber, Tati Westbrook, that saw Charles lose more than a million subscribers in just 24 hours. But perhaps, no one ever expected to see Charles and Pewds band together to play a video game.

YouTube king PewDiePie and make-up guru James Charles teamed up for KEEMSTAR's Minecraft competition on Monday, and while Pewds streamed the match on DLive, a blockchain-powered livestreaming platform, Charles did the same on Twitch.

During the contest, which pits the biggest Internet personalities against each other, the duo hilariously discussed their sponsors, make-up, and why they named their team "dick and balls" - even though eventually James tweeted a completely different team name.

#MinecraftMonday was SO much fun and at the last second, team #SisterFisters with @pewdiepie took the victory! 😂⚔️ Good game everyone and thank you for allowing me to play! 🥺💕

Their unexpected "chemistry" worked pretty well, judging by a wild storm of all sorts of reactions online:

hmm, i just woke up to james charles and pewdiepie playing minecraft, what dimension is this pic.twitter.com/E89JNztBgm

I hate all of you I saw James Charles trending and I thought some more tea had been spilt,,,, turns out this bitch was just playing Minecraft with PewDiePie cba pic.twitter.com/UCtbt60cZ0

saw pewdiepie trending and thought there was another controversy over something he did again. instead found out hes playing minecraft on a livestream with james charles... pic.twitter.com/mun7kpvIRg

When ⁦@pewdiepie⁩ and ⁦@jamescharles⁩ discuss a makeup collab and shout out to their sponsors 😎😉😉🤗👀👀 pic.twitter.com/en2SNTMbOr

In January 2019, Charles tweeted that he wanted to do a collab with Pewds in "full glam" just when the Swede was embroiled in an epic battle against the Indian music label T-Series for the title of most-subscribed YouTube channel.

The two seemingly hit it off after the beauty influencer found himself at the epicentre of a controversy when his friend and mentor, YouTuber Tati Westbrook, accused Charles of manipulating people's sexuality using his wealth and fame.

The Westbrook-Charles row apparently broke out after James had posted a video about gummy vitamins, which were a direct competitor with Tati's beauty supplements - something she viewed as a betrayal.

Even though Charles apologised to her, the online drama caused him to lose more than a million subscribers in just 24 hours, including big-name celebrities like Kim Kardashian, Kylie Jenner, and Miley Cyrus, among others.

At the time, everyone's favourite YouTuber, Pewds, criticised the entire sitiation, wondering why Tati had all of a sudden turned against her protégé.

"She's putting herself on a pedestal while she clearly was completely fine not outing this behaviour of James Charles essentially abusing people's sexuality, and as long as James Charles would instead have promoted her vitamins, she would've been fine with it," he said.

In the end, PewDiePie pointed out that although he didn't exonerate Charles, he believed that "something else" must have happened for the two to abruptly end their friendship.