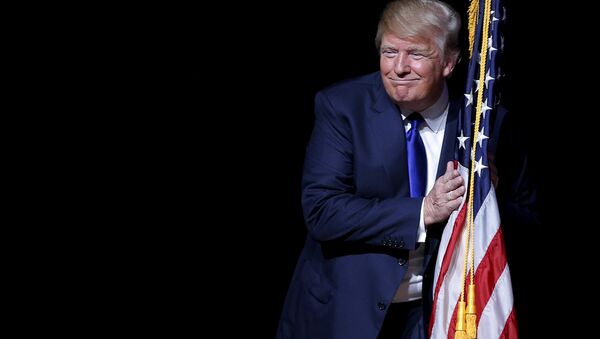 From John McCain t-shirts to the internationally renowned “baby Trump” balloon, US President Donald Trump’s "Salute To America” celebration is set to be the scene of numerous demonstrations against him and his administration.

Fireworks with a $750,000 price tag won’t be the only spectacle at the National Mall in Washington, DC, on Thursday, July 4, as the US president is planning to pull out all the stops for what he says will be a showing of the “strongest and most advanced Military anywhere in the World.”

Big 4th of July in D.C. “Salute to America.” The Pentagon & our great Military Leaders are thrilled to be doing this & showing to the American people, among other things, the strongest and most advanced Military anywhere in the World. Incredible Flyovers & biggest ever Fireworks!

In addition to placing two of the US Army’s M1A1 tanks in a currently undisclosed location, the commander-in-chief also plans to have the US Navy’s Blue Angels conduct flyovers, according to a Monday press release from the US Department of the Interior.

Tanks President Trump is bringing in for the “Salute to America” celebration at the Lincoln Memorial July 4. They’re on trains in SE DC right now.
President says they’ll be part of a patriotic celebration, but there are concerns they could damage the National Mall & city streets. pic.twitter.com/7paj9FqpH0

Attendees can expect appearances from officers representing the US military’s five service branches; vocal performances from the National Symphony Orchestra, Carole King, Vanessa Williams and Colbie Caillat; and a showing from the “Sesame Street” Muppets. Yes, even Elmo and friends.

Defense One reports that the B-2 stealth bomber, Air Force One and F-22 Raptor are also expected to perform aviation demonstrations during the event.

The president’s VH-92 “Marine One” helicopter, which is still in the testing phase until late next year, is also expected to make an appearance in the skies, according to a Tuesday ABC News report.

However, Trump is not the only one bringing his favorite toys for the military-focused, hijacked holiday celebration. On Monday, the National Park Service officially awarded Tighe Barry and social justice NGO Code Pink a permit to fly the infamous “baby blimp” created in Trump’s likeness at the event – the same protest piece that Trump said made him “feel unwelcome” in the UK, according to his 2018 London interview with The Sun.

ICYMI: The NPS has approved the "baby Trump" balloon for July 4. pic.twitter.com/JLZGWyV5uT

Despite Trump touting that “there’s nobody that respects the military more” than himself in a Monday tweet, those words are sure to be put to the test, as nonprofit US veteran group VoteVets is planning to hand out around 5,000 USS John McCain t-shirts to members of Congress and those along the National Mall.

Best thing that's arrived in my mail in a long time.#FundTheShirt pic.twitter.com/DKe43b04ao

Last month, WTOP reported Phantom and Grucci’s pyrotechnic companies donated $750,000 worth of fireworks to the event to close out the night. Though fireworks usually provide a moment when many can come together and forget about partisan politics, Trump is creating yet another divide by designating VIP sections that are reportedly free, according to Secret Service, but do require tickets and additional security screenings to access. It’s unclear how one would go about obtaining said tickets.

Even those who want to get out of the area may have difficulties, as the Ronald Reagan Washington National Airport spontaneously canceled and suspended a number of flights throughout Thursday night due to high air traffic from flyovers and fireworks.

FAA Statement: On July 4, the #FAA will suspend operations at @Reagan_Airport from 6:15 p.m. to 7:45 p.m. ET. Operations will also be impacted from 9:00 p.m. to 9:45 p.m. Please check with your airline for flight information. pic.twitter.com/HbLumFNuZJ

The polarizing spectacle is slated to begin around 11:45 a.m. and conclude around 9:42 p.m. on Thursday along the National Mall.