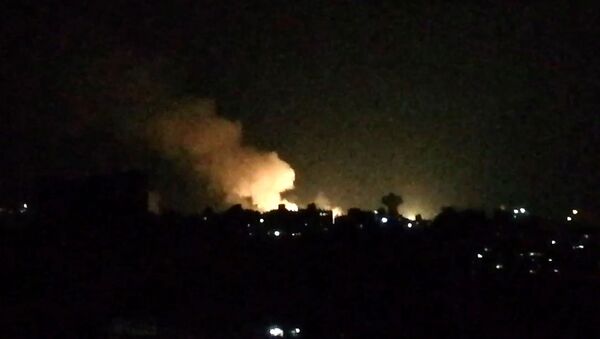 DAMASCUS (Sputnik) - In the late hours of Sunday, the Israeli Air Force carried out an attack on the southern outskirts of Damascus and Homs from the Lebanese airspace. As a result, 16 people were killed, including a newborn baby, according to the Syrian state television.

"Syria is always ready to reciprocate twice as harsh [against Israeli attacks]", Mekdad was quoted as saying by the ministry after Foreign Minister Walid Muallem’s talks with Ali-Asghar Khaji, a special assistant for political affairs to the Iranian foreign minister.

According to Mekdad, Syria "is at war with Israel everywhere", fighting terrorist groups that he says the latter uses as "tools".

"The purpose of this attack by Israel is to protect its tools, especially in light of the victories of the Syrian army and its allies", the diplomat added.

He stressed that at the moment the region needed a calm environment, not an escalation.

"The world, the UN Security Council and the United Nations itself need to understand the danger of such a development since Syria will not keep silence about its right [to retaliate]", Mekdad noted.

Commenting on Israel's air raids, Russian Foreign Ministry spokeswoman Maria Zakharova has described the attacks as a gross violation of Syria's sovereignty and a threat to the regional stability.

Israel has been repeatedly carrying out strikes on the Syrian territory on what it claims Iranian targets justifying its actions with security concerns over alleged Iranian military presence next to its borders. Iran, in turn, has been consistently saying that its presence in Syria as part of counterterrorism assistance was coordinated with Damascus and does not have to be agreed with Israel.