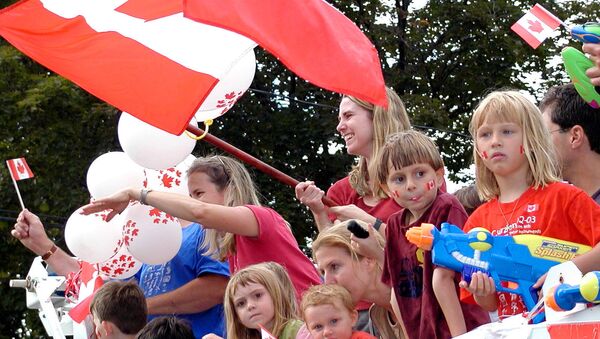 CC BY-SA 3.0 / Martin C. Barry / The Canada Day Parade
Subscribe
The national holiday celebrates the anniversary of the creation of the Dominion of Canada as a single entity out of three British colonies. The ten Canadian provinces each boast a unique interpretation of the annual event.

Monday marks the 152nd Canada Day celebrating the anniversary of the nation’s 1867 Constitution Act, the core of the Canadian Constitution, which unites three separate British colonies - Nova Scotia, New Brunswick and the Province of Canada - into a single Dominion called Canada. Originally called Dominion Day, it was renamed in 1982.

This year’s capital city celebration in Ottawa was attended by Prime Minister Justin Trudeau, who opted to visit those communities most affected by recent steel and aluminum tariffs imposed by US President Donald Trump.

“Canada Day on Parliament Hill is something of a tradition for many of us and I couldn’t be happier to be back with you this year,” Trudeau said in a speech, according to Global News.

​“We saw something very Canadian. We saw people being there for each other during tough times […] in the weeks that followed, a wave of solidarity swept across the country. We put up a united front. We leaned on each other,” he noted.

Proud to be Canadian, today and every day. Happy Canada Day! 🇨🇦 pic.twitter.com/OiWGaL8BLM

Among the Ottawa attendees this year are Canadian actor Ryan Reynolds and Canadian astronaut David Saint-Jacques, who spoke via video link as he recovers from his recent tour of duty on the International Space Station.

​“This is an opportunity to celebrate our province and our country,” she observed.

In Montreal, festivities including a parade, line dancing, food trucks and fireworks were accompanied by a citizenship ceremony for new Canadian immigrants and a cake-cutting event. Montreal Mayor Valérie Plante took to social media to congratulate her compatriots, Global News reported.

​“On this 1st of July, I would like to wish a happy Canada Day to all Montrealers, as well as good luck to those of you who are moving into their new home today,” she wrote.

On this 1st of July, I would like to wish a happy Canada Day to all Montrealers, as well as good luck to those of you who are moving into their new home today! 🎉🇨🇦📦🚚 #CanadaDay #polmtl