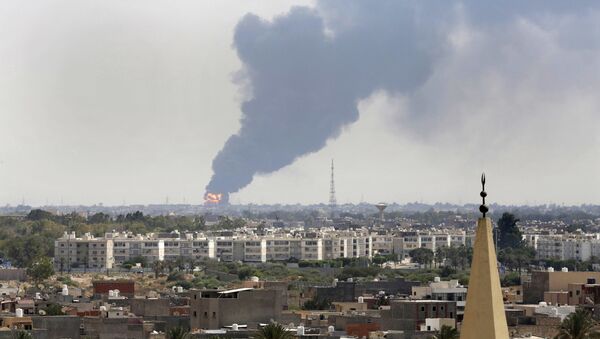 © AP Photo / Mohammed Ben Khalifa
Subscribe
An air strike late on Tuesday hit a detention facility for migrants in the Tajoura suburb of the Libyan capital of Tripoli, Reuters reported, citing an official at the targeted location.

An airstike against a detention centre for illegal migrants in a suburb of the Libyan capital killed 40 and wounded 80, Reuters reported, citing a health official.

A representative of Tripoli’s medical service confirmed Wednesday that the airstrike near the Libyan capital had really left at least 40 people dead.

“As a result of the airstrike, which hit a detention center for undocumented migrants in the Tajoura district, 40 migrants from various African states were killed and 80 others were injured”, Malek Merset said, adding that the ambulance services continued to provide those injured with necessary assistance.

According to previous report, the official who works in a department combating illegal migration that runs the facility, said that there were casualties among the migrants.

Since early April, the Libyan National Army (LNA) has been engaged in an offensive to gain control over Tripoli. The UN-backed Libyan Government of National Accord (GNA) has been waging a counteroffensive to prevent the LNA from capturing the city.

According to the United Nations, over 3,800 refugees and migrants remain in detention centers in Tripoli nearby areas where fighting is taking place.

Libya fell into chaos after longtime ruler Muammar Gaddafi was deposed and assassinated in 2011. Thousands of people from the impoverished nation have embarked on a perilous journey across the Mediterranean in hope's of reaching Europe.

The European Union made a deal with Libya in 2017 to stop the exodus, but the United Nations warned that many migrants face arbitrary detention and death in the North African country.

Libya has been torn apart in the ongoing conflict. The eastern part of the country is governed by the parliament, backed by the LNA and located in Tobruk. The GNA, headed by Prime Minister Fayez Sarraj, operates in the country's west and is headquartered in Tripoli.