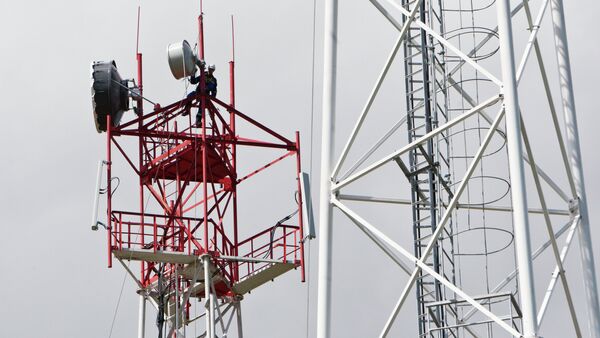 © Sputnik / Yakov Andreev
/
Go to the photo bank
Subscribe
A New Pentagon white paper argues the US is falling behind Russia in so-called “gray zone competition,” warning that a “polarized” America has encountered a “narrative problem” that blocks it from countering Russian “political warfare” around the globe.

In nearly every area of the globe, nearly two dozen academics found evidence of “Russian malign influence and activities below the level of armed conflict,” outlining them and criticizing Washington’s failure to match Moscow with a response appropriate to how the Russian government thinks.

The 150-page white paper on “Russian Strategic Intentions” was prepared by 23 contributers, including academics, think tank fellows and Pentagon brass in May 2019.

The report reflects many of the anxieties - as well as the dominant ideological narratives - associated with Washington’s shifting geopolitical position at the end of the second decade of the 21st century: amid the continued rise of China towards being a “fully developed nation” by 2050 and the recovery of Russia to a position of global prominence decades after the collapse of the Soviet Union, the US finds itself with “a narrative problem,” increasingly unable to sell its self-proclaimed mission civilisatrice and role as global policeman to either its own public or to the world at large.

"In this environment, economic competition, influence campaigns, paramilitary actions, cyber intrusions, and political warfare will likely become more prevalent," Navy Rear Adm. Jeffrey Czerewko, the Joint Chiefs of Staff deputy director for global operations, writes in the report’s preface. "Such confrontations increase the risk of misperception and miscalculation, between powers with significant military strength, which may then increase the risk of armed conflict."

Collectively, the report terms these “gray zone” operations, with Jason Werchan of US European Command’s strategy division writing in one chapter of the report, "These activities include threatening other states militarily, or compromising their societies, economies, and governments by employing a range of means and methods to include propaganda, disinformation, and cultural, religious, and energy coercion.”

The report is divided up by region, detailing Russia’s efforts to disrupt Western influence and promote its own interests in Europe, Central Asia, the Middle East, Africa, Latin America and even the Arctic. It recommends a variety of responses, from sanctioning Russian financial institutions to “legislative actions to expose Russian actors spreading propaganda” on social media and promoting government transparency and a free press in countries where Russian influence is expected or suspected.

In two key documents published in February 2018, the Pentagon laid out the basis for its present understanding of the geopolitical relationship between the US, Russia and China. In the National Defense Strategy, Pentagon strategists said that "inter-state strategic competition, not terrorism, is now the primary concern in US national security,” and in the Nuclear Posture Review, released at the same time, they described the geopolitical situation as a "return to Great Power competition." Last month, then-Acting Defense Secretary Patrick Shanahan referred to an “inter-state strategic competition, defined by geopolitical rivalry between free and repressive world order visions."

US leaders have professed a growing fear of a new Chinese-Russian pole emerging in Asia. “The world system, and America’s influence in it, would be completed upended if Moscow and Beijing aligned more closely,” Werchan flatly stated in the report. Last August, the two nations cooperated defensively in ways not seen since the 1950s, with Moscow inviting the People’s Liberation Army to participate in its massive Vostok war games, Sputnik reported.

"Beginning in the late 1990s, with [Russian President Boris] Yeltsin, and continued to a much greater degree by [Russian President Vladimir] Putin, there has been an incredible rapprochement between Russia and China," international affairs and security analyst Mark Sleboda told Sputnik at the time. He noted that while Washington has been busy painting Beijing and Moscow as their enemies, "from these types of exercises, it is obvious that Russia and China feel the same way.”

"It is clear that a fresh round of arms racing threatens," John Arquilla, a director at the Naval Postgraduate School, wrote in the white paper. "The United States can either embrace this, hoping to outpace the Russians, or try to head off such a costly competition with a rededicated arms control/reduction policy." However, it seems that the Pentagon is increasingly dedicated to Arquilla’s former proposition, proposing a vast acceleration of its missile development in its budgetary requests for Fiscal Year 2020 and beyond, Sputnik reported.

Without a hint of irony, as the report firmly points fingers at supposed Russian disinformation campaigns, it also readily identifies pro-American mouthpieces like Voice of America and its affiliated broadcast services as key parts of its counter-Kremlin toolbox. It also speaks of, for example, the dire need to promote liberalism and Western models of society and government in Eastern Europe, but most especially in the former Soviet republics and former socialist allies of the USSR, while simultaneously denouncing Russian efforts to advance their own interests in countries that, until 30 years ago, were part of the same country as them and with whom Russia often still shares borders. By contrast, American interests in the region are only keeping competitor Russia weak.

Dr. Jeremy W. Lamoreaux of Brigham Young University, in his chapter on the Baltic states, is even forced to admit that “Russia is already somewhat backed into a corner economically and diplomatically.”

However, one major problem the report identifies is that the US is disunited, which weakens its ability to project a clear message about its mission around the world.

“We still have a story to tell, but because we are so polarized and are doubting ourselves, we have a narrative problem,” Anna Borshchevskaya, a senior fellow at the Washington Institute for Near East Policy who contributed a chapter to the report, told Politico in an interview. “Russia does not.”

Leaving aside the notion that Russian society is a uniform monolith in which there are no conflicting visions of the country’s role in the world, the idea that American disunity is a weakness is a dangerous slide toward a fascist conception of the relationship between state and society.

With perhaps the largest social justice movement in the US in years being the Movement for Black Lives, which from combating police brutality to opening the debate on reparations for slavery has sought to change the narrative of US history and of the US’ role in the world, the fact that this movement has already come under fire from the liberal media as well as US intelligence for being, at least in part, the work of Russian influence operations, should give anyone reading this report pause. The white paper is, in effect, arguing that social justice movements, anti-war movements and other groups that seek to challenge the narrative presented by the US leadership in Washington and the Pentagon are either implicitly or explicitly tools of Russia and China, and weaken the US’ ability to accomplish its goals abroad and protect its interests.

However, where disunity is a US weakness, it’s also a Russian weakness, and Thomas Sherlock, a professor at the US Military Academy at West Point, citing his own data, notes in the report a “relatively weak approval among the [Russian] public” for Putin’s foreign policy goals.

"While both elites and members of the mass public are supportive of restoring Russia's great power status, they often define a great power and its priorities more in terms of socio-economic development than in the production and demonstration of hard power," a summary of Sherlock’s report states. "These perspectives increasingly come into conflict with those of the Kremlin."

000000
Popular comments
Ah the Pentagon and the art of projection, what masters they are of it. They have a boogeyman in every closet ready to haul out at will.
TravelAbout
2 July 2019, 00:47 GMT6
000000
The US IS DOING and HAS BEEN DOING everything the US is accusing Russia of....and more, including active wars in at least 3 countries, active efforts at regime change in 8 countries, trade wars, sanctions, freedom of navigation harassments, embargoes, supporting terrorists and insurgents in multiple countries, cyber attacks....and doing it all blatantly, openly and crudely. It is no wonder that the US is "losing in the Gray Zone", The US is even attacking their friends and Allies.